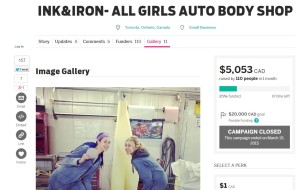 The Women’s Industry Network Conference has begun in Washington, D.C., after a last-minute move from Baltimore prompted by the recent unrest.

WIN tweeted Monday that the women-in-collision-repair event has 81 first-time attendees. About 176 total were registered as of last week, a near-record.

In connection with the conference, we’d like to remind any women considering a career in collision repair that they’re likely to find steady employment thanks to an estimated shortage of workers. We’d also like to share these highlights and links from other recent media coverage of women in the predominately male profession. (The Daily Commercial coverage mentioned below cited Catalyst data that found auto body repair was 1.5 percent female in 2013.)

Having been in the industry for nearly 20 years and a member of the Women’s Industry Network (WIN) for the past nine, I can say without pause that many women are building their careers in the collision industry at all levels and within all segments of the industry – from the reception desk to ownership, intern to engineer, appraiser to senior claims manager and clerk to vice president.  I would encourage you to visit WIN’s website for an overview of the talent within WIN and the collision repair industry.

Daily Commercial coverage of WIN scholarship winner Leni Casares, who wants to be an auto body tech and own a shop herself (and here’s the full scholarship list.):

Casares said when she graduated from high school and expressed her interest in a career in the automotive industry, several members of her family, including her grandmother and father, questioned why, explaining it was a man’s job.

Even so, in October 2014, Casares made the decision to attend Lake Tech to follow her dream, despite opposition from some members of her family, who expressed that such a career is not the “norm for a lady in the 21st century.”

… “I like working with my hands and not doing the same thing every day,” she said. “Not every car is disassembled the same way. It is like a puzzle.”

29-year-old (Hilary Noack) … says Ink and Iron is a place for young female technicians to work and learn.

Also, here’s an older, but more in-depth piece from Autofocus during the campaign. (It also actually spells Noack’s name right.)

The twins’ ownership is also significant in other ways. Not only are they most likely the youngest people to run such a business in the state, but also the youngest twin girls to work in auto body repair.