USAA is the nation’s fifth-largest insurer with 5.17 percent of the U.S. market, according to 2014 data from the National Association of Insurance Commissioners.

No. 6 Farmers (5.09 percent), No. 8 Nationwide (3.85 percent) and No. 9 American Family (1.85 percent) do have their respective subsidiaries Foremost, Titan and the General represented. But USAA is the first large insurer to be completely involved.

Google Compare is only available in California — for now — and USAA only covers service members, veterans and families. So the announcement probably doesn’t quite carry the weight of the top 4 insurers or even if Farmers or No. 6 Liberty Mutual had completely signed on. But USAA trying the pilot program still means insurers and repairers should pay attention.

USAA also has plans and room to grow despite its niche. Its various offerings serve 10.9 million people, and it estimates 60 million altogether might be eligible to use it.

“For those unfamiliar with USAA, this could provide another way for potential members to discover USAA and learn about our competitive products and exceptional customer service,” USAA innovation Assistant Vice President Jon-Michael Kowall said in a statement.

Google’s move into insurance matters for repairers both because if it does take off in all 50 states, Google’s search engine dominance could make it the place to shop for policies. USAA coming on board matters because Google needs partners with clout if Americans are going to actually use it. (Apologies to Infinity and Dairyland Auto, but Google’s lineup until now didn’t seem likely to make California drivers take Google Compare seriously when it’s missing brands that are staples of Super Bowl advertising.)

However, Google’s search dominance might not be able to overcome the kind of brand recognition described above without serious advertising of its own. Searches for “auto insurance,” which is about the most popular “cheap car insurance”-type search term we could find, were below those of the nation’s top insurers. This is from Google Trends (image also provided before article for users who have difficulty seeing interactive):

If Google is successful, comparison shopping in the U.S. could push more consumers into high-deductible, low-coverage policies, which mean less business for shops as customers’ damage grows uncovered and they opt to avoid repairs within those higher deductibles.

Byteback Group managing director Jon Parker gave a bleak picture in an April 2014 FenderBender column of what Google Compare and its competitors have wrought in the U.K. by allowing users to pick different deductibles:

“Fewer people will claim when they have a collision because they suddenly realize that they have a $1,500 deductible, and it’s unaffordable. This means fewer repairs being carried out. The smaller, more profitable work is being taken away, and the statistics we witness show annual claims percentages down in about five years from 14 percent to just 8 percent—almost half of the work being repaired under the (direct repair program) model.”

Sixty-five percent of insurance is bought through these sites in the U.K., Parker wrote in April 2014, and premiums fell 40 percent. This caused pressure on insurers internally and to seek savings from the repair process, according to Parker.

A screenshot of the British Google Compare site. (From www.google.co.uk/compare)

This Google Trends report shows how “auto insurance” as a search term fared against the nation’s top insurers. (Screenshot of Google Trends) 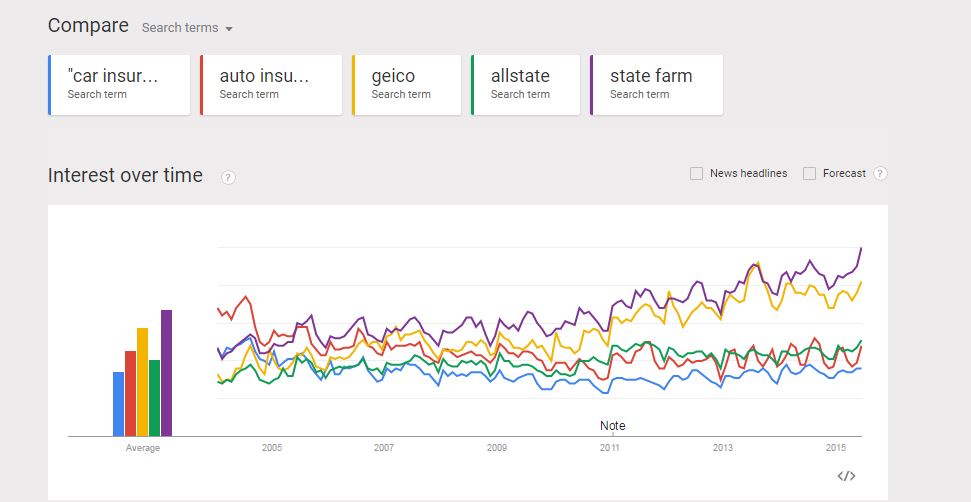 This Google Trends report shows how “auto insurance” as a search term fared against the nation’s top insurers. (Screenshot of Google Trends)