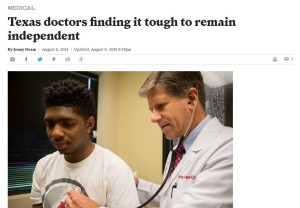 A Saturday Houston Chronicle article describing the difficulties faced by Texas independent doctors echoes some of the complaints collision repairers have with insurers.

Replace the part about the Affordable Care Act with a similar clause about new vehicle engineering requiring additional training and equipment, and this paragraph could be an introduction to a Collision Industry Conference panel:

An independent streak is deeply ingrained in Texas medicine, but these days it’s becoming a struggle for smaller practices to remain autonomous. Reimbursement payments are dropping, and insurance companies are becoming less willing to negotiate with smaller players, many doctors say. Mix in new regulations under the Affordable Care Act, often requiring additions of staff and expensive technology services, it is small wonder some independent doctors feel they are in quicksand.

“They would say, ‘We don’t really care what you think your services cost, this is what we’re going to do,'” he told the Chronicle.

And this following passage sounds awfully like consolidation — right down to the possibility being bandied about of dividing MSO repairers into tiers handling vehicles with either low, moderate or extensive damage. (Preventative health tends to be cheaper and can be handled in volume, while a specialty obviously addresses more severe cases — though some specialties might be more common than others.)

In recent years, hospitals have been on a buying spree, luring overwhelmed small-practice doctors with offers to buy them out – and bring their patients along with them. The doctors become employees or enter some type of affiliation agreement.

In this era of consolidation and integrated care, a doctor’s practice that offers a specialty or preventative health is especially attractive – or vulnerable – to a buy-out.

In terms of consolidation in the medical industry, the article cites Merritt Hawkins data that found 11 percent of doctors nationally working for hospitals in 2004 — compared to 64 percent in 2014.

Both industries can argue whose insurers are worse, but since you can’t declare a human body a total loss as easily as a car, doctors still might have it easier. Plus, people trust doctors more than mechanics, Gallup found in 2014, which probably helps get the patient on one’s side when negotiating with insurers. (The company doesn’t survey the public about auto body shops specifically.)

In any case, repairers should know they’re not alone and insurers aren’t a lot of fun for doctors either. Perhaps there’s room for joint efforts at state Legislatures, or at least pointing out to lawmakers that collision repairers aren’t the only ones facing a particular insurance issue.