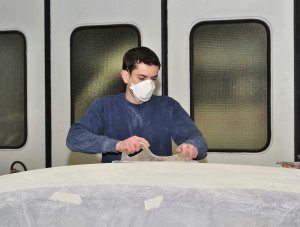 Besides discussing this possible privacy concern, Valenzuela also Tuesday addressed other possible hurdles to shop participation in the searchable documents database announced Friday. The feature is expected to appear as a new Variable Rate System offering before the end of the quarter Sept. 30.

In May, NABR announced preliminary findings that on average, a shop had a better than 50-50 chance of being reimbursed by an insurer for one of 12 “non-included” procedures. Though that study involved 150 responses from collision repairers in 34 states, the organization felt even more tangible proof — such as estimates or checks from a job — would help body shops seek out and receive fair compensation for their work.

Shops submitting such records to NABR for its database would probably be given the option to remain anonymous, but “most of the shops have no trouble sharing who they are,” Valenzuela said.

“The main issue is protecting the consumer privacy,” he said.

Though trade events such as the Collision Industry Conference (and insurers themselves, according to litigation) caution collision repairers not to discuss their rates, Valenzuela was confident shops would not face antitrust issues sharing specific procedure payment records with the industry via NABR/VRS.

“That (nondisclosure) might be appropriate for a trade meeting,” Valenzuela said, calling it one of the larger “misnomers” in the collision repair industry.

However, he said, “in the open public, you can tell the world what your price is. … that’s not against the law”

“It is perfectly legal to tell anybody your price,” Valenzuela said. It’s only when businesses collude to keep prices at a particular level that problems occur, according to Valenzuela.

While acknowledging that direct repair program shops — which another survey found has even better luck getting paid for “non-included” work — wouldn’t be able to share their records, Valenzuela felt that enough independent shops would participate to make the records collection worthwhile.

“We will have more documents than we can handle,” said Valenzuela — noting that he was speaking figuratively.

So far, shops hadn’t reported retaliation or avoided working with NABR out of fear of insurer reprisals, Valenzuela said.

“We’re hoping it works the other way,” he said. “… No one’s really expressed a fear of retaliation.”

Nor have insurers ceased to reimburse shops for “non-included” procedures upon seeing May VRS data showing competitors weren’t paying,” according to Valenzuela. (Collision repairer lawsuits against insurers have alleged the defendants refuse to pay more for labor than State Farm does.)

“We have not heard the negative side,” Valenzuela said.

Valenzuela said the database would begin with documents related to the 12 operations described in May’s answers but add 10-30 more procedures “pretty quickly.”

The items tracked will be “ultimately determined by the shops,” according to Valenzuela, who speculated about VRS data for a “top 30, even a top 50 list.”

Currently, NABR only had a “handful” of records, said Valenzuela, predicting growth and potentially even regional data sets in the future as repairers contributed more documents. Participants can email them to info@variableratesystem.com for now; an upload option on the VRS website is planned.

Subscribers will receive access to the database as part of their $99 monthly rate, a premium NABR intends to increase “sometime in the near future,” according to Valenzuela.