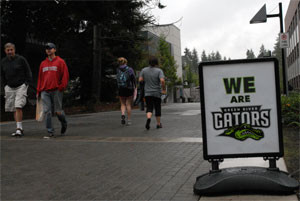 With audience members holding his photo to show support, a former Washington auto body instructor blasted a college board last week over cuts including his own program, according to the Kent Reporter.

Faculty have claimed the cuts were meant to punish Mark Millbauer, who had also been the head of the United Faculty union and involved in a year of contract negotiations for his colleagues, according to the newspaper. The college says the auto body program was cut because of a tight budget and low interest, the Reporter wrote.

“I think it would be unfair if we made other choices just on the basis that ‘Oh, this is the lead of the union,'” Green River Vice President Derek Brandes told KPLU earlier this year. “Should I cut another program to avoid dealing with the obvious retaliation claims that were going to come about?”

Millbrauer, a 22-year-employee, recently took what he called a “satisfactory” buyout after making headlines protesting the cuts, according to the Reporter.

Millbrauer also criticized the cut of the auto body program following construction of a new trades building, according to the Reporter. The college will put a different trade program into the space, the newspaper said.

“It was a gross waste of taxpayer dollars that went into designing the perfect auto body training facility and equipping it,” Millbauer said, according to the newspaper.

Faculty like Millbrauer were given chances to come up with cost-cutting measures or enrollment cap increases in other programs, KPLU reported. The Kent Reporter noted that other programs targeted for cuts did come up with solutions.

Still, auto body technology is predicted to be a jobseeker’s market in future years, so it does seem a bit shortsighted of the college — as well as the students seeking degrees at Green River, not to show more interest.