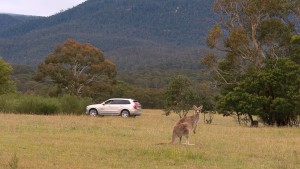 Volvo vowed Thursday to develop the first kangaroo detection and crash-prevention system, a move which would make for safer travels but fewer collisions to repair across Australia.

The National Roads and Motorists’ Association estimates the 20,000 annual kangaroo-vehicle collisions every year produce $53.3 million in insurance claims, according to Volvo. (It’s unclear if the statistic includes medical and other property claims or simply vehicle damage.)

“The human cost of serious injuries and fatalities from animal collisions is incalculable,” Volvo wrote in a news release.

Volvo experts this week arrived in the Australian Capital Territory to study the animals roadside at Tidbinbilla Nature Reserve near Canberra and refine a radar/camera detection and auto-braking system.

“Whereas Volvo Cars’ Pedestrian Detection technology is geared towards city driving, our kangaroo detection research is focusing on highway speed situations,” Volvo senior safety engineer Martin Magnusson said in a statement. “Kangaroos are very unpredictable animals and difficult to avoid, but we are confident we can refine our technology to detect them and avoid collisions on the highway.

“In Sweden we have done research involving larger, slower moving animals like moose, reindeer and cows which are a serious threat on our roads. Kangaroos are smaller than these animals and their behaviour is more erratic. This is why it’s important that we test and calibrate our technology on real kangaroos in their natural environment.”

The technology, which Volvo calls an offshoot of the human and vehicle-detecting City Safety, seems ripe to convert for American roads and their deer, and Volvo’s been working on that too.

State Farm recently estimated American drivers have a 1 in 169 chance of hitting a deer, elk or moose in 2015 — rising to 1 in 84.5 in October, November and December. Average deer et al-vehicle claims are likely to be $4,135, up 6 percent. (Like the Australian data, it’s unclear if this statistic includes anything other than vehicle damage.)

The insurer estimated 1.25 million claims last year involving the three animals, which means we’re talking a few billion dollars in claims and repairer work which could be saved by a solid animal collision avoidance system here.

Volvo says its computer can react in 0.05 seconds, while a human averages 1.2 seconds. Even if conditions hinder object detection and slow the collision avoidance activation, the car still has a huge head start over human drivers — who would likely also be slowed by similar visibility issues. (And the computer won’t become tired or intoxicated.)

“The Volvo Cars City Safety technology is a true state-of-the-art technology, because the brakes can be primed in milliseconds – much faster than a human reacts,” Magnusson said in a statement. “We are only at the beginning of what is possible.”

However, the system also will likely make the vehicles which do crash more expensive to repair. Volvo describes a combination of a radar sensor in the grille and — glass installers take note — a “very advanced light-sensitive, high-resolution camera in the windscreen.” Bang those up in a frontal collision, and it means not only more expensive parts but also more electronic calibration time.

“Drivers Beware: The Odds Aren’t In Your Favor”

Featured image: Volvo vowed Thursday to develop the first kangaroo detection and crash-prevention system, a move which would make for safer travels but fewer collisions to repair across Australia. (Provided by Volvo)