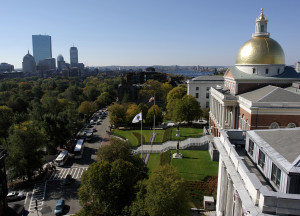 New language cleared for use in Massachusetts auto insurance policies could theoretically allow insurers to set labor rates off the cheapest direct payment plan collision repairer in the Commonwealth.

And consumers might have to pay all punitive and exemplary medical costs under the revised Massachuetts Automobile Insurers Bureau policy. (See a memo of all the changes here and a similar consumer’s notice here.) So for the love of God, don’t hit someone near an ambulance-chaser law office.

The new terms were reviewed by the state Division of Insurance and placed on file Oct. 20. The DOI action doesn’t mean the agency likes or dislikes them — merely that nothing in there seems to violate Massachusetts law or regulations. The Massachusetts Alliance of Automotive Service Providers disagrees, pointing to several points it finds concerning.

The document, last updated in 2008, provides state insurers with language assumed to be legal which they can adopt or modify in future policies.

The individual insurers must still submit their desired policy changes to the DOI, though presumably those who just cut and paste from the bureau document will have a quick time of it.

DOI review at that stage doesn’t involve any sort of assessment of the merits of the policies either.

None of these reviews are made public. One must essentially keep on top of the agency to learn of proposed changes.

“They’re never going to allow for feedback,” the AASP-MA said in a statement.

That’s not a great scenario for consumers, auto body shops, doctors — basically, anybody who isn’t an insurer.

For shops, the most alarming change is likely this addition to the 2015 version of the collision, comprehensive and limited collision sections:

“The cost to physically repair the auto is the competitive price, which we secure from a licensed repair facility under our direct payment plan,” the document states.

Direct payment plan shops often collect between $30-40 an hour from their respective plan insurers, according to the AASP-MA.

“A, meaning, one referral shop would establish the labor rate for that insurer for the entire state of Massachusetts,” the AASP-MA said in a statement.

So even if you’re not a direct payment shop, you get paid their “competitive price.”

This seems to fly in the face of Massachusetts regulations saying insurers must negotiate rates with collision repairers, according to the AASP-MA.

That’s not all. The new paragraph continues with this for consumers: “Unless you have purchased agreed amount coverage, actual cash value of the auto will be determined at the time of the loss. Actual Cash value may include an adjustment for depreciation and betterment and for the physical condition of the auto.”

The more paranoid of us could even construe the “physical condition” reference to allow an insurer to say without a trace of irony, “This car’s been in an accident, so it’s now worth less than Blue Book.” Or deduct cash value for aftermarket parts required by another insurer in a prior crash.

If you tow or store vehicles for an insured customer, the AIB policy proposal states the insurer will only pay for the amounts stated by the Department of Public Utilities related to involuntary/trespass towing.

Storage rate for involuntary towing: $35 a day, plus extra labor if needed.

This was done even though the Department of Public Utilities flat-out states: “The Department does not regulate towing requested by a vehicle owner.”

AASP-MA said the new AIB language also could allow insurers to avoid covering costs for special equipment or hazardous material clean up, like antifreeze spilled at the scene. That’d fall to you, the policyholder, according to AASP-MA.

The trade group sees the new language as falling into the less-consumer friendly scenario described above.

“Under these proposed changes, consumer’s may be unaware that they are getting less coverage and increased liability while auto insurance costs continue to climb,” AASP-MA said.

The trade group is keeping tabs on future developments as they occur.

Body shop staff and owners are also drivers, and it seems like they should be terrified by liability changes to the bodily injury section.

“We will not pay for punitive or exemplary damages,” new language states.

The Massachusetts Alliance of Automotive Service Providers logo is shown. (Provided by AASP-MA)