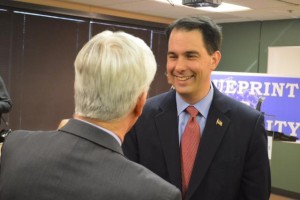 Car insurance companies can no longer demand repairs be made at a particular auto body shop under a bill signed last week by Republican Wisconsin Gov. Scott Walker.

Ironically, glass repairers have had that protection in place since the 1990s.

The state of Wisconsin effectively supported collision repairer choice for more than a decade, when the Wisconsin Insurance Commissioner’s Office issued an opinion in favor of it.

However, an aide to state Rep. Edward Brooks, who sponsored the companion Assembly Bill 119, said Wednesday there was a desire to enact the concept as law. Reports of steering had continued despite the opinion — even as recently as October — Brooks’ research assistant Terri Griffiths said.

SB 93, which was popular enough to pass the Senate and House with informal voice votes, also prohibits insurers from dragging their feet if the customer picks a collision repairer they don’t like. It was sponsored by Republican state Sen. Howard Marklein, and Republican state Rep. Edward Brooks sponsored the Assembly version, Assembly Bill 119.

“No insurer may fail to initiate and conclude with due dispatch an investigation of a claim for repairs to a motor vehicle on the basis of whether the repairs will be made by a particular contractor or repair facility,” the bill states.

Interestingly, this language isn’t in the glass consumer choice statute. Maybe that’s a future project for the Legislature.

Walker signed the bill Nov. 11; it took effect with publication Thursday. Unfortunately, consumers with existing policies can still be forced to go wherever the insurer wants until the date of their next renewal.

“To those members who made phone calls and met with their legislators, and attend public hearings — THANK YOU!,” WACTAL wrote in an email newsletter. “Your efforts paid off!

“Now it’s up to all of us to help get the word out. Let friends, family, past and potential customers know they have the right to choose!”

So, is it too late to get Walker back into the presidential race?