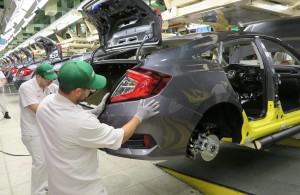 More than a quarter of the 2016 Honda Civic is ultra-high-strength-steel, a major shift towards the light, strong — but sensitive — metal for one of America’s staple vehicles.

The existence of the heat-sensitive, unsectionable, unstraightenable alloy means auto body shops must use different repair procedures than with past generations of the popular vehicle.

Honda earlier this month released a collision repair overview which should serve as a good introduction to the 2016 Civic’s full repair procedures  — as well as the impetus to check the latter out before and during repairs in your own shop.

Not surprisingly, collision repairers have questions about the new vehicle.

Following our coverage of the Honda Body Repair News highlights, we received an inquiry about the 1,500-megapascal rear frame rails with “soft zones” (the pink areas with yellow borders in the diagram below) found on four-door models. Honda in the Civic’s Body Repair News tells repairers to follow some general guidelines regarding the 2016 assemblies. Among them: Clint Rogers, owner of Triangle Collision, queried how the repair could be done.

“Would someone at Honda care to explain how in the aftermarket we are supposed to replace the 1500 mp rear frame rail with no MAG/MIG butt welds?” he wrote to Repairer Driven News. “We cannot access all the weld locations with a spot welder short of removing the entire side of the car.”

Given the high interest our readers have shown in the vehicle, we took the unusual step of submitting the question to Honda. Perceiving the same interest from the broader collision repair industry, the automaker was gracious enough to answer with the following statement:

“The new-from-the-ground-up 10th-generation Civic represents one of the most comprehensive and ambitious new-model developments ever undertaken by Honda. One that set a new benchmark in the mainstream compact class for fun-to-drive performance, safety performance and fuel efficiency, together with a new level of refinement. New thinking and approaches to body construction, such as the use of 1,500 MPa rear frame rails, were required to meet these benchmarks.

“The use of 1,500 MPa frame rails requires that they be replaced as complete assemblies at the factory seams, with no sectioning allowed. The approved removal and installation procedure was developed on an actual vehicle in Japan and is published in the 2016 Civic Body Repair Manual.

“The basic repair procedure involves removal of the rear body panel and trunk floor to access the rear frame rails and requires a commercially-available 500mm spot welder extension arm. MIG brazing and MAG plug welding are used in areas inaccessible by the spot welder depending on the grade of steel involved. The rear outer (quarter) panel and wheelhouses do not need to be removed unless required by the severity and angle of impact.”

Obviously, auto body shops should refer to the full Civic repair procedures for more details and the actual steps. But we hope this sheds a little more light on the topic ahead of the Civic’s debut in dealerships in March.

Honda of Canada staff install a rear bumper fascia on a 2016 Civic Sedan. (Provided by Honda)