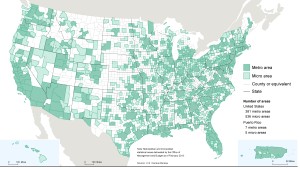 “In an effort to support consistency, State Farm is refining certain market boundaries utilized to determine prevailing competitive prices to align with government defined market areas,” the company wrote in emails to shops this month, announcing the conclusion of the market study launched this summer. “Updates may result in PCP adjustments in some areas in addition to the periodic changes in PCP relating to updated repairer pricing and capacity information.”

Shops have reported both higher and lower rates following the conclusion of State Farm’s efforts.

One state trade group we’ve agreed to keep anonymous has reported being told by State Farm that the insurer was applying the Office of Management and Budget’s “core-based statistical area” to a major urban area of the state. Such classifications are used by entities such as the Census Bureau for statistical work and other purposes.

We want to stress there’s no confirmation that this is what State Farm is doing nationwide; the insurer refused our request to define the “government defined market area” term.

But if this is indeed happening in other states, here’s a little context and food for thought.

(This discussion will focus solely on the geographic “market area” concept — something shops have alleged State Farm has distorted to suit itself. It won’t address the more serious lawsuit allegations that State Farm indirectly through “half plus one” fuzzy math or directly monkeys with the survey responses themselves.) If State Farm treated each micropolitan area separately with regards to labor rates, it would at least seem to alleviate shop allegations the insurer is painting giant swaths of states with the same prices.

… While Mississippi’s population is relatively small, there are over 360 miles between Southaven and Ocean Springs. This is more than the distance between Jacksonville and Miami, by way of comparison.

Despite this distance and variance, and the fact that no Plaintiff charged less than $44.00 per hour, State Farm had determined the market rate was $42.00 per hour for body and refinish labor and $35.00 for paint.

Brookhaven, Miss., and the area around it is a separate micropolitan area. If State Farm stuck to an accurate survey of solely that area and the surrounding Lincoln County and applied an “island” rate to that region, it might be a little more palatable to the plaintiff shop than identical rates across a 360-mile area with no explanation. Of course, that still begs the more important question of why not just pay a reasonably priced shop what it’s charging. In this case, it’s a $4/hour difference, not a $40/hour difference. We’d bet some State Farm staff performing similar jobs have a couple of dollars/hour difference based on merit; why shouldn’t shops?

Metropolitan areas are likely to be far more controversial.

Some are restricted to a single county with a large city. Others sprawl over such a large geography within a single state — or multiple states — that it becomes a stretch to think a single “prevailing rate” could be sought from all shops.

In fact, the state trade group we talked to is reporting that some shops within the confirmed metropolitan region are seeing a rate increase — while other businesses are seeing rates fall. If you survey an area that large and apply a single rate to it all, as State Farm is allegedly doing, that’s not surprising.

Going back to the Missisissippi example for hypothetical purposes, let’s look at Southaven, Miss.-based Bill Fowler’s. Southaven is part of the Memphis, TN-MS-AR metropolitan area, which as the name implies sprawls with the Memphis suburbs across three states. All three states presumably have different laws, regulations and licensing affecting collision repairers and insurers, not to mention geography.

So would a collision repairer in Southaven, Miss., a DeSoto County suburb, have much in common with a shop in Covington, Tenn., located an hour north in Tipton County, even though both are part of the same metropolitan sprawl? Or with a shop in the heart of Memphis, Tenn.?

Here’s other metropolitan examples which span three or more states. Look them up or your own state on the map links above and see what you think.

Finally, the feds stress that these core-based statistical areas are only supposed to be used for statistical work. They even seem a bit concerned that other federal agencies might get too cute with them. So as our analysis shows, it could be problematic for the private sector as well.

As the Office of Management and Budget wrote in 2013:

Thus, OMB cautions that Metropolitan Statistical Area and Micropolitan Statistical Area delineations should not be used to develop and implement Federal, state, and local nonstatistical programs and policies without full consideration of the effects of using these delineations for such purposes. These areas should not serve as a general-purpose geographic framework for nonstatistical activities, and they may or may not be suitable for use in program funding formulas.

OMB recognizes that some legislation specifies the use of Metropolitan Statistical Areas for program purposes, including the allocation of Federal funds, and will continue to work with the Congress to clarify the foundations of these delineations and the resultant, often unintended consequences of their use for nonstatistical purposes. In cases where there is no statutory requirement and an agency elects to use the Metropolitan, Micropolitan, or Combined Statistical Area delineations in nonstatistical programs, it is the sponsoring agency’s responsibility to ensure that the delineations are appropriate for such use. When an agency is publishing for comment a proposed regulation that would use the delineations for a nonstatistical purpose, the agency should seek public comment on the proposed use.

U.S. metropolitan and micropolitan areas as of 2013. (Provided by U.S. Census Bureau)

Metropolitan and micropolitan “core based statistical areas” for Mississippi as of 2013. (Provided by U.S. Department of Commerce, Economics and Statistics Administration and U.S. Census Bureau)