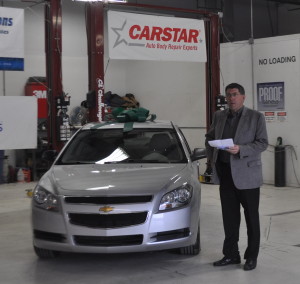 Driven Brands Paint & Collision Group President Jose Costa and CARSTAR President Dan Young outlined their vision for insurance and operations — and how a spate of recent layoffs served that idea — in a conference call with reporters.

“We saw a lot of areas of opportunity,” said Costa, whose division includes MAACO, CARSTAR and Drive N Style. Costa was MAACO’s CEO prior to the sale.

“This reflects the primary group that left CARSTAR,” company spokeswoman Debby Robinson wrote in an email Monday when asked if other executives besides that group were laid off.

Costa said the industry should expect “corporately, not any more changes. We did one restructuring move.” He said Driven Brands’s style after buying a company is to be one-and-done with restructuring.

Young, who was chosen in part because of his insurance work at CARSTAR, spent about 20 years at Allstate before joining the company in 2003.

At Allstate, he worked his way up from claims adjustor to property services manager. He also would have been at the company around the time it received the infamous “McKinsey slides.” (Read this Bloomberg Businessweek report for more about the controversy.)

Costa said he was excited by the additional diversity, including Miller becoming the first female CARSTAR vice president.

For your CARSTAR shop, that likely means more people helping you meet KPIs (not necessarily a bad thing) and keeping insurers happy (which can be a more problematic trade of margins and/or repair quality for volume) — and presumably on your case if you’re not keeping up.

Byers this summer described CARSTAR as an “insurance-friendly network,” and programs like EDGE existed prior to the switch, so this shouldn’t be a huge cultural shift.

CARSTAR describes the EDGE program as “a comprehensive roadmap to achieving industry leading performance metrics, with hands-on coaching support from a national field service team. This allows you to meet and measure the performance standards set for the insurance carriers’ MSO and DRP programs.”

Still, we wonder how much ground individual CARSTAR owners — who under the franchise model still retain control of their business — as well as policyholders will be expected to give to satisfy insurers. (CARSTAR’s customer satisfaction consistently hits 97 percent, the company says.)

Young, like Byers, said the chain has been “insurance-friendly,” but he wants to “get our stores more work.”

About 90 percent of CARSTAR’s repairs are insurance-paid (including both direct repair program and non-DRP jobs), according to Young, but he said the number could still be higher. (In case you were wondering, Costa said MAACO is about 2 percent DRP.)

“There’s a lot of competition out there,” he said.

If you’re already at 90 percent, how do you deliver the kind of growth Driven Brands wants?

“It’s 90 percent of what number,” Young explained. “… That ‘what number’ is increasing.”

Right now, the market is too saturated with body shops, and “we have stores that aren’t at capacity,” he said.

“We still have way too much capacity out there,” he said.

By increasing insurance partnerships and networks, total volume of repair orders at CARSTAR stores grows, and everyone gets paid. (CARSTAR doesn’t share its franchise terms, but for some perspective, MAACO takes 8 percent of franchisees’ gross.)

That’s where the KPIs and operations folks come in to play. Though the insurance team works with insurers and shops on the idea of performance-based repair, the operations team’s job is to enact the EDGE program, train and certify shops, keep customer satisfaction high and roll out CARSTAR branding, according to Robinson.

“We have worked very, very hard” to close insurers through performance metrics and brand quality, Young said “that work has been aided greatly by the operations team.”

“Our job is to provide the insurance industry” with customer satisfaction and quality work, according to Young.