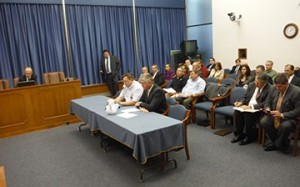 A summer Michigan Senate bill stripping insurers of the power to mandate certain vendors or systems — even with a DRP contract — is beginning to show a little life in the Legislature.

The Insurance Committee, chaired by bill sponsor Sen. Joe Hune, held a hearing on Senate Bill 430 earlier this month and released its analysis of the effect on state and local government budgets. (None, although the Automotive Service Association argues differently.)

There does not appear to be a House companion to the bill.

Under the bill, insurers would be prohibited from mandating “directly or indirectly, through a contract, program, or policy, a person that operates an automobile repair facility to use a specific vendor or process for the procurement of parts or other materials.”

The ban would start only 90 days after the bill was signed by Gov. Rick Snyder.

The bill would block State Farm from mandating PartsTrader or American Family from specifying APU, for example. Presumably, any direct repair program contracts explicitly spelling out such usage would have to be amended to remove that language.

But though those provisions would have to go, Risley stressed that the bill wouldn’t prohibit direct repair agreements, according to prepared testimony filed with the Insurance Committee.

“Our position on mandatory parts procurement systems is not about DRP’s but rather about how an insurer can go too far in controlling a small business and its vendors,” Risley said in the prepared testimony. Calling out the elephant in the room, Insurance Institute of Michigan Executive Director Peter Kuhnmuench stressed in a letter to Hume, R-Hamburg, that shops choose to sign on to State Farm’s DRP and its requirement that PartsTrader be employed.

“IIM opposes the bill as an inappropriate government restriction on businesses’ ability to freely contract in the open market for mutual benefit,” he wrote.

If you don’t like the terms of a DRP, he wrote, don’t join. If you join to boost your volume through insurer recommendations and decide you don’t like the program, DRPs let shops leave at-will, he argued. (Of course, lawsuits allege that insurers badmouth and interfere with shops not in the programs.)

Risley said in the testimony that shops didn’t oppose procurement tools either. But the marketplace, not an insurer, should pick winners and losers, he argued.

“An insurer requiring the use of one company ignores the potential for technological advances in parts procurement and discourages competition,” he said.

Plus, if multiple insurers require multiple systems, “it will be cost prohibitive and too labor intensive for repair shops,” Risley said in the testimony.

Kuhnmuench wrote that PartsTrader “provides a national marketplace to efficiently and cost effectively connect” vendors and shops. Suppliers bid on the parts being requested by shops.

“Beyond that, State Farm does not require the collision shop buy the cheapest, closest, or quickest delivery part,” he wrote. “That decision is left to the repair shop to make the best choice to fit the individual circumstance.”

But based on the ASA’s testimony, that might not always be the case. (We covered, for example, an American Family mandate to use an Arizona supplier’s part for a repair in the Midwest.)

“Collision shops have noted that average estimates have remained the same since the new mandatory parts program was put in place,” Risley said, citing factors like delays related to ordering from nonlocal vendors or returns of lower-quality parts flagged by the procurement systems and costs passed from those vendors to the shops to the estimate.

Kuhnmuench wrote that customer service and repair times weren’t affected. He also wrote that local vendors are free to participate in PartsTrader, though that’s a bit misleading.

Anyone can join PartsTrader, but the service takes a cut of sales and charges a subscription fee. APU doesn’t charge suppliers, but they must be vouched for by an insurer or shop to join.

Insurers who have parts procurement system mandates aren’t lowering rates either, according to Risley.

“This bill is common sense legislation and, when passed, will be a great victory for Michigan consumers as well as the automotive repair community at large,” Fisher said in a statement. “This situation is not unique to my state, and it is my hope that Michigan can serve as a model for repairers in other states facing this issue.”

Similar legislation in the form of a budget amendment nearly passed in Minnesota this year but was stripped out in last-minute Legislative chaos.

Jordan Hendler, executive director of the Washington Metropolitan Auto Body Association, which unsuccessfully lobbied for similar Maryland legislation last year, this summer offered some lobbying advice to Michigan collision repairers. Find out what she had to say here.