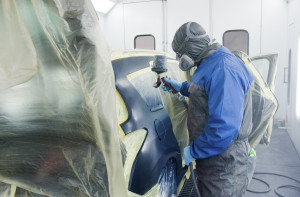 Though DRP refinish labor rates are unaffected, the insurer won’t pay for any paint & materials costs beyond the cap without a supplement, according to an American Family email and a DRP shop owner we’ve agreed to keep anonymous.

The owner said at least two other insurers in the region have similar paint and materials caps in place. American Family used to have such a ceiling a few years ago, dropped it for an unknown region, and now has re-established it effective Jan. 1, 2016, the owner said.

The average third-quarter Mitchell appraisal was projected to be about $2,903; 10.76 percent of that would be $312.36 in paint and materials.

American Family DRP shops — like many collision repairers — use an artificial hourly P&M rate instead of itemizing the actual paint and materials used on the job, according to the owner. He said he’d heard of other insurer DRPs which did allow the newer practice of itemizing paint and materials costs, though he didn’t know if similar caps existed in those cases.

The owner said he told American Family that he wouldn’t hesitate to use supplements when more than $450 in materials are needed for a repair, and he said the insurer was amenable to the stance.

“For me, it wouldn’t be uncommon” to have repairs over $450, the repairer said, estimating that the materials supplements would be necessary in about 35-40 percent of repair orders.

He said American Family didn’t really penalize shops for supplement frequency, though it did watch supplement severity. He said the other insurers with similar materials caps didn’t ding collision repairers for filing P&M supplements either.

“They’re (American Family) more concerned about the speed of the claim and making sure you keep your claim updated,” he said. “… It’s not like it’s going to be detrimental (to KPI metrics).”

But while there was little effect on his operation besides “additional steps,” he expressed concern about other shops.

He said he thought American Family was using the cap as a “tactic” to save money at the expense of collision repairers who don’t submit supplements or are deterred by an initial “no” to a submission they’re justified in filing.

“I honestly think they view it as a way to save money on claims,” he said.

An email message early Friday afternoon to American Family has not yet been returned.

Another DRP shop owner in the region blasted the policy as “complete b—t.”

That owner said his state expressly prohibits caps on paint and materials, and wondered how American Family could have a $450 threshold and still meet it.

He speculated that policyholder receiving a cash payout could lose money if the insurer just blindly applied the $450 cap for materials without actually calculating how much the items would really cost.

If that happens, “they’ve been short-paid,” he argued.