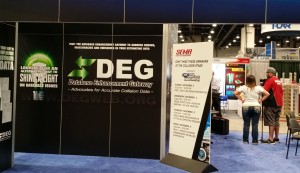 The Database Enhancement Gateway, which allows repairers to make inquiries and suggestions of the Big 3 estimating providers, has been augmented this year to provide weekly tips for repairers on the AudaExplore, Mitchell and CCC programs.

If you haven’t used the service before to submit questions about estimating collision repair work or just browse responses to other shops’ questions, check it out. It’s a valuable resource akin to I-CAR’s Repairability Technical Support Portal, but focused on teaching repairers and insurers database usage best practices instead of OEM best practices.

Here’s some recent areas spotlighted as tip-worthy by DEG; we round them up periodically for our readers. To receive the tips as soon as DEG releases them, like/follow DEG’s Facebook and Twitter feeds.

Chip guards on a Silverado

If you’re working on a chip guard and using AudaExplore, you might have to add in some operations manually, according to the IP.

“THE CHIPGUARD ON THE NEWER GM MODELS ARE DIFFERENT THEN THE PAST MODELS,” the user wrote. “(THE PAST HAD 3M CLEAR STONEGUARDS IN FRONT & REAR OF WHEELS) THE CHIPGUARD AREA IS EXTENSIVE.”

The user argued that the operation should allow for more time to create the template for the area needing a chip guard.

AudaExplore opted not to change anything, explaining, “Chipguard defines the Audatex automated formula for this operation. When special requirements are needed for a specific vehicle, the estimator would have to account for those requirements manually.”

The DEG advises collision repairers that the time to work one’s way through damaged panels must be entered manually in the three major estimating services.

“Before starting repairs or even the estimate, it may be necessary to cut, push or pull damaged panels to gain access to the vehicle,” the DEG wrote. “This is a not included operation in all three estimating systems.”

Need to show as much to an insurer? Here’s where to find it in the AudaExplore, CCC and Mitchell manuals:

Mitchell, Page P3: “Access Time,” defined as “Remove extensively damaged parts by cutting, pushing, pulling, etc.” is among the list of operations lacking labor times because of “the wide range of collision damage and vehicle conditions,” according to Mitchell.

AudaExplore, Page 54: A repairer should use Standard Manual Entry M62 to describe “access labor,” AudaExplore states,” defining that as extra work “for removal of parts that have been impeded by crash damage.”

CCC, Page G-10: Located conveniently under the caveat that all included labor times refer to work on a new, undamaged vehicle (Frame it for quick reference when insurers question your manual entries.), CCC lists “Cutting, pulling or pushing collision damaged parts for access” among factors not incorporated into labor times.

Follow the footnote, CCC wrote in response to an October inquiry about a 2012 Toyota Tacoma.

The inquiry is a little unclear, but it appears to reference an apparent contradiction between P-Pages which state that removing and installing a rear bumper is included in the R&I time for the bed, and a footnote which says it isn’t. If the footnote is wrong, it should be corrected, the user states.

The footnote wins the argument, according to CCC:

“After review of the Pick Up Box group, footnotes found in a chapter contain vehicle-specific information,” CCC wrote. “The content of footnotes is in addition to and takes precedence over, information in the Guide to Estimating pages for the operation indicated.”

Does the CCC labor time on emblem installation involve removing the old emblem and any glue left behind?

The labor time includes “Clean/heat surfaces,” “Component align/position” and “Installation of component only” but not “Adhesive backing removal, clean up and replace,” “Damage panel repair” or “Door hardware.”

Who pays for a bag?

The DEG also highlighted one of the AudaExplore FAQs (a resource worth exploring in the AudaExplore manual; see Page 178). It’s short, so we’ll just reproduce the Page 182 question-and-answer:

Q: “Does bagging and masking include the cost of the bag?”

A: “Audatex includes the time in the labor. However, the estimate preparer decides what is, or is not included in the Paint Materials.”

Got a question or comment about Mitchell, AudaExplore or CCC? Ask the DEG here.

Some recent inquiries on the Database Enhancement Gateway. (Screenshot of www.degweb.org)