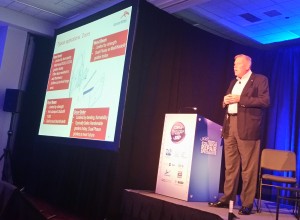 OEM engineers have a wide and growing variety of automotive steels at their disposal, and it’s important for auto body technicians to understand the distinction — and check the manual to determine which is which.

The explosion of steels over the past two factors has been driven by two factors: the environment and safety, according to ArcelorMittal automotive product applications Director Dr. Blake Zuidema. He and other industry experts discussed the metal and its repairs at the SCRS OEM Collision Repair Technology Summit at SEMA.  (Get his presentation free from SCRS here.)

Fuel economy to reduce carbon dioxide emissions must reach federal targets. Each vehicle will be judged on its “footprint”: the wheelbase multiplied by track width — not each OEM’s corporate average anymore, Zuidema said. (For convenience, the industry cites the collective target of 54.5 mpg you’ve frequently seen on this site.)

Miss that target, and “you will not sell that vehicle,” Zuidema  said.

ArcelorMittal test vehicles achieved 22-23 percent weight loss, and steel currently is cheaper than other options — though he acknowledged some competitors could join it on vehicles.

“Will you see more aluminum? I have to admit it,” Zuidema said. Crash safety defined by regulators and, in the U.S., the nonprofit IIHS, means the lighter steels must predictably direct collision energy to protect occupants.

“That is a very, very difficult test,” he said.

“Most of the manufacturers have just gone crazy” trying to meet the 2012 addition, Hughes said, and with aftermarket parts, “all bets are off.”

As you’ve no doubt observed in your shop, OEMs work to pass such tests and manage crash energy through the design of crumple zones and the passenger compartment, according to Zuidema. For crumple zones, OEM engineers want an axial “accordion crush,” he said. But the passenger compartment should stay intact and keep the car from imploding on the occupants.

Crumple zones therefore use steels up to about 800 megapascals, according to Zuidema. (Major steel strength groups can be defined differently by different parties, but traditional automotive “mild steel” usually maxes out around 300 MPa.)

ArcelorMittal produces Ductibor steels which offer higher ductility but lower strength, and “they’re controlled precisely” by a laser-weld. A 1,000 MPa Ductibor is in the works, he said.

The passenger compartment demands even stronger stuff to protect occupants in side-impact scenarios as well as hits to the front and back. 1,080 MPa “gigapascal” ultra-high-strength steel has become common on new model generations, and the new Honda Civic reaches 1,500 MPa.

Stronger steels can be more difficult to shape, and OEMs use MartINsite for easily formed parts, according to Zuidema.

And five to six years in the future, OEMs might use NanoSteel, which is configured on the microscopic level, according to Zuidema. Benefits include a good materials memory for its intended shape, he said. Right now, heat from repairers is the enemy of higher-strength steels, according to Zuidema. These steels often mean no welding or sectioning can occur in strength-critical areas, or else the vehicle’s crash energy load path could be disrupted and passengers put at risk, he said.

That’s why other joining methods can be demanded, OEMs design sectionable joints away from ultra-high-strength-steel components, and consequently why such UHSS components must often be replaced instead of repaired, according to Zuidema.

One audience member at the Society of Collision Repair Specialists event asked if the increased ductility in some of the stronger steels being developed improved repairability, and Zuidma said it’s too early to tell.

“We’ll see,” he said. More cold straightening might be possible, he speculated, but heat would still be forbidden.

All of these steels look the same, Toyota collision training administrator Joe DiDonato noted during the expert panel.

Thus, you must check the repair procedures to know which to repair, which to replace, and how to carry out either of these procedures, according to panelists.

You must do so on every vehicle model year (not once per model), and every repair, panelists said — downloading the manual four months ago or even a day ago doesn’t help if the OEM updated the procedure since then.

Honda collision instructional designer Chris Tobie gave the example of his company’s Odyssey and CR-V, both of which saw a recent dramatic change between model year to model year, and DiDonato said the Lexus IS went very ultra-high-strength steel between the 2013 to 2014 model years.

Here’s some of the Odyssey’s changes: Even something visible to the naked eye can trip up a repairer. DiDonato said that once on a factory visit, he saw a laser weld on a vehicle and erroneously thought it was a sectioning point.

Repairers looking for OEM manuals can check the OEM One Stop site, the automakers’ version of the I-CAR RTS portal. Honda and GM even make some collision-related materials free, according to Tobie and Hartman.

“Doing it from memory is a guaranteed way to put a bad repair,” Tobie said. Shops must develop a habit of getting the necessary data before working on a car, he said, and Hartman noted that while laptops might be visible in a mechanics’ repair area, they might not be so prevalent in body shops’.

“It has to be in the culture,” Tobie said.

The explosion of steels over the past two factors has been driven by two factors: the environment and safety, according to ArcelorMittal automotive product applications Director Dr. Blake Zuidema. He and other industry experts discussed the metal and its repairs at the SCRS OEM Collision Repair Technology Summit at SEMA. (John Huetter/Repairer Driven News)

Costs to lightweight vehicles with carbon fiber, aluminum and steel. (Provided by ArcelorMittal)

Auto steels today and in development. (Provided by ArcelorMittal)