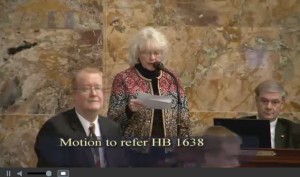 Update II: The Pennsylvania Senate Banking and Insurance Committee hearing on S.B. 1638 has been scheduled for 9:30 a.m. in Hearing Room 1 of the North Office Building. It should be viewable live on www.pasenategop.com.

Update: Though the confusing language discussed here remains, it might become moot thanks to an amended Senate bill version OK’d by Virginia repairers and insurers.

Denied a public hearing in the House on a bill allowing photo-only appraisals, Pennsylvania collision repair advocates will have their “day in court” in the state Senate next week, according to the head of a state trade group.

Pennsylvania Collision Trade Guild Director Steve Behrndt wrote in an email the hearing on House Bill 1638 had been scheduled for Wednesday before the Senate Banking and Insurance Committee.

“This is an important hearing for the consumers of Pa. It is important for the appraisal industry, collision repairers and towers. Each of these industries will be financially impacted in a negative fashion,” Behrndt wrote in an earlier email to opponents. “The state Capitol should be filled with industry and consumer supporters however our industries have shown fear of retaliation in the past and allowed the insurance industry to take whatever they want. The time is now to show them we will not allow it.”

The PCTG also set up a Change.org online petition this week to draw public support.

No time or room had been designated yet, Behrndt told opponents. The Senate calendar online doesn’t yet appear to show that information, or even the hearing’s existence.

In the House, the group had tried to seek a public hearing from the Insurance Committee, but was refused. Opponent Rep. Tom Murt, R-Montgomery County/Philadelphia County, had later tried unsuccessfully to obtain a hearing on the bill from the Veterans Affairs & Emergency Preparedness committee — which is chaired by a bill opponent — but was rebuffed by the House Dec. 7.

The bill was “clearly on the fast track” and hadn’t yet received the views of the collision repair industry at a hearing, he said. That was “blatantly unfair and shows favoritism” to the insurance industry, he said then.

Insurance Committee Chairwoman Rep. Tina Pickett, R-Bradford County/Sullivan County/Susquehanna County, argued then that her committee did in fact vet the bill and made the changes collision repairers wanted. However, the PCTG vehemently opposed the bill and criticized the refusal to provide a public hearing on the measure.

Virginia will consider similar legislation, but its true scope is confusing. Senate Bill 193 and House Bill 870 would amend Virginia Code 38.2-510 to state:

“No person shall commit or perform with such frequency as to indicate a general business practice any of the following:

We read this to read that a personal inspection was still needed, but the appraisal developed by the photo desk review could be the “final, repair appraisal,” which seems as though unscrupulous insurers could satisfy the law with a perfunctory in-person look by a shop or appraiser.

However, a Sunday analysis by Virginia State Corporation Commission analyst Van Tompkins seemed to find that no personal inspection at all was required by the law.

“The patron introduced Senate Bill 193 at the request of insurance industry to allow for the use of smart device technology in the filing/appraising of automobile damage claims,” Tompkins wrote. “Currently, the claim process cannot be completed without the personal inspection by the insurer or collision repairer. If Senate Bill 193 were enacted, claimants could choose to repair the damages or not, without further inspection requirements than the initial photographic, video or digital imagery, and receive payment from the initial report and imagery. A personal inspection may still be necessary to identify possible hidden damages.”

Reached by email Friday, Tompkins wrote that he’d need a couple of days to re-examine the bill.

Neither bill’s sponsors responded to phone or email requests for clarification Friday. The Virginia Legislature and Tompkins’ agency were closed in anticipation of a winter storm.