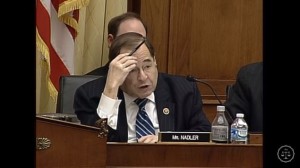 Though representatives seemed skeptical of the merits of cutting patent rights for a single industry under the PARTS Act, there appeared to be an appetite for some sort of change in patent law in a U.S. House subcommittee hearing Tuesday.

The latest iteration of the law would prevent automakers from enforcing patents on the appearance — but not the function — of replacement parts only after only 30 months from patent issue.

Right now, any design patents issued by the government are good for 14-15 years. (The duration switched to 15 years in the middle of last year because of an international treaty.)

The Courts, Intellectual Property, and the Internet Subcommittee of the House Judiciary Committee heard House Resolution 1057 on Tuesday, and a companion bill exists in the Senate: S. 560.

He encouraged more feedback from the witnesses.

“There’ll be more to follow. … My expectation is the chairman and I will work on future hearings, including with the Patent and Trademark Office,” Issa said.

Assuming that happens and the bill just doesn’t die amid other Election Year congressional priorities, the hearing Tuesday suggested some changes that could make the bill more palatable.

All of these would of course be the sources of major controversy in their own right, some of which was heard Tuesday.

U.S. Rep. Jerry Nadler, D-N.Y., asked Gillis why the bill targeted only automotive OEMs and if the PARTS Act would set a precedent to erode other industry design protections.

“Ah yes, that’s a possibility,” Gillis said. “I think that overall there are probably a number of industry areas that could use this type of repair clause protection.”

As to the reason for targeting OEMs, “Expense is the key rationale,” he said.

To Burris, an intellectual property attorney there to represent the Alliance of Automotive Manufacturers, Nadler asked how allowing automaker design patents to grow unchecked by such a law wouldn’t yield an OEM monopoly. (Automakers currently hold about 70 percent of the aftermarket share.) It was simple, she said: Use refurbished or repaired parts or design the part differently.

Wasn’t this a “lifetime” protection against competition, since people often don’t keep a vehicle for 14 years? Nadler asked. If 30 months was too short, is there a “fair solution” at fewer than 14 years?

“Would there be a different period?” he asked.

Burris said that was a question for OEMs. From a legal standpoint, Burris said she opposed it for the idea of an exception.

“Your basic argument is uniformity of the patent law?” he said, and she agreed.

The 30-month rule might even apply to existing patents, according to discussion between Rep. Hakeem Jeffries, D-N.Y., and Burris.

Jeffries asked if the law could even be considered “retroactive.”

Issa also raised the timeframe point in a frankly disengenous exchange with Burris in which he argued that maintaining the status quo extended patent duration for automakers.

Asked by Issa if a timeline of 30 months from the date the first part with the patent was sold would be acceptable, Burris said no. Under existing law, all design patentholders get 14-15 years now depending on if pre- or post-2015 treaty. “That’s what the law says,” Burris said.

“We’re arguing over your level of happiness based on length,” he said. What about cars off the market. Should patent protection apply to them?

Yes, she said, prompting him to paint her as seeking “greater exclusivity” for OEMs.

U.S. Rep. Doug Collins, R-Ga., said there were parts of the bill that deserved consideration, while he had problems with other aspects of it.

“There is some ideas here that we might could work for,” he said.

He seemed most opposed to the idea of an exception, discussing it during an exchange with Gillis in which he asked where the witness saw the “right to competition” for consumers Gillis described.

Gillis called it a fundamental part of capitalism, and it was “un-American” to eliminate it.

Sure, but don’t patent owners have a right to enforce patents? Collins asked. Only if such patents were “legitimate,” Gillis said. OEMs were patenting items that 10 years ago they couldn’t, he said.

Pressed on that point, Gillis relented and agreed with Collins that OEMs could indeed still have patented the items then, but “they chose not to.”

“Why are they choosing to patent them today?” Gillis said.

“So as a conservative who believes in free markets, you’re gonna run to the government to say, ‘Government, put your thumb on the scale,'” Collins said.

But there were flaws with the patent system, Collins agreed with Issa. He noted that some sort of change was needed to ensure greater PTO rigor, noting the undeserving items earning patents today. But that wasn’t an automaker-specific issue, he said.

“That goes across the spectrum,” he said.

Burris clarified that in the European Union, such parts must be marked clearly as aftermarket, and the generic manufacturers must compensate the OEM.

That’s sort of happening now already, according to Gillis. He argued for the bill on the grounds that Ford, GM and Chrysler all allow select independents to distribute design-patented components — “parts they are telling this committee shouldn’t exist” — in exchange for a royalty.

But Felder said that created an unfair “duopoly” and an unfair advantage for LKQ over other aftermarket distributors like her.

“We are at risk of design patent infringement suits,” she said. Asked by Rep. Judy Chu, D-Calif., what recourse she had, Felder said the only option was to buy them from the OEM-approved licensee.

“We prefer not to sell these parts,” Felder said.

There was no economic incentive to do so given the existing markup of a distributor like LKQ, she said.

They do make an exception for a few select customers — who’ve agreed to pay more – and “we have often lost money,” she said.

Worse, OEMs can still mistakenly target you anyway, according to Felder. Though Felder’s had obtained a Chrysler part from LKQ, they still received a cease and desist letter from the OEM and had to pay a patent attorney $3,000 to handle it.

“They didn’t just take our word for it,” she said.

Issa asked her about the option of a compulsory license where an OEM had to let anyone distribute copies of a product. Would a licensing fee, say $2.50, be acceptable to her for that option?

“We should not have to go and pay a licensing fee to provide a customer with a competitive product,” she said.

While that might be OK for some industries, she said, this wasn’t one of them.