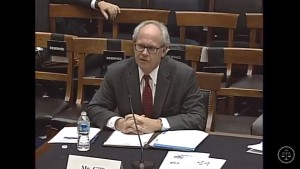 In his submitted testimony; federal grant disclosure form; and oral opening testimony Tuesday, he offers a long series of consumer and auto safety groups for which he was appearing in support of the PARTS Act, known as House Resolution 1057 and Senate Bill 560.

His connection to the Certified Auto Parts Association — Gillis is the executive director — didn’t appear in any of those C.V.s to the House Courts, Intellectual Property, and the Internet Subcommittee.

Which seemed unusual, considering that CAPA has not only expertise in aftermarket parts — its data was used and cited in Gillis’ written testimony — but presumably an interest in having as many parts as possible to certify.

The PARTS Act bill discussed Tuesday would do just that, allowing unlimited aftermarket copies (in appearance, anyway) of replacement auto parts after 30 months instead of the 14-15 years of design patent protection OEMs have today.

Gillis on Thursday disputed that stake and drew a distinction between his work for CAPA and his other organizations with regards to the testimony.

Based on his and the House’s own accounts, Gillis was appearing first and foremost as the public affairs Director of the Consumer Federation of America.

“We are extremely grateful for your invitation to appear today.”

Gillis’ CAPA stake in the PARTS Act’s passage didn’t appear until nearly an hour into the hearing (about 54:30), when Rep. Jerry Nadler, D-N.Y., asked about the quality and safety of aftermarket parts.

“Well, first and foremost, the parts should be certified to be functionally equivalent to the car company brand part,” Gillis said.

“Certified by whom?” Nadler asked.

“Well there’s at least one agency that I’m familiar with,” Gillis said. He named and described CAPA.

“In the interest of full disclosure, I’m the executive director of that nonprofit group,” he said.

Gillis: There is a distinction

Reached Thursday about the minimal disclosure of his CAPA affiliation to the House committee, Gillis said there was a clear distinction between his roles.

“I was testifying on behalf of CFA and the four other consumer groups,” he said. Not CAPA, which he said he only joined in 1989 as an extension of his consumer advocacy to “continue to protect consumers against poor quality and overpriced parts.” 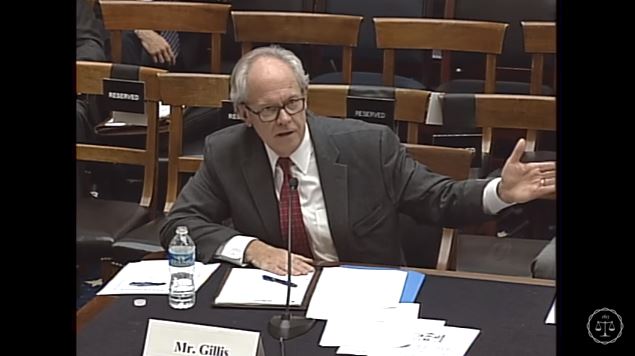 Asked if it was disingenuous to downplay his CAPA role in favor of his consumer and safety affiliations, Gillis bristled, saying that there was “nothing disingenuous about my fight for consumers”

“That’s kind of a disparagement that I take issue with,” he said.

CAPA, which collects a fee from parts submitted, didn’t have a stake in seeing more aftermarket parts, he said.

“I think that shows an unfortunate misunderstanding of what CAPA is,” Gillis said.

“We don’t sell certification,” he said. The group was a “public service.”

Nor did he have a similar interest as an executive director drawing a salary from that revenue, he said.

In fact, CAPA for now operated at a loss, he said.

“My overarching goal is to make that a break-even venture at some part in time,” he said.

He blamed collision repairers for CAPA’s lower market share. “We wish that body shops would say no to noncertified parts,” he said.

Asked about CAPA’s market share in terms of insurer demand for aftermarket parts (OEM, NSF, noncertfied, etc.)  he said he wasn’t sure but mused it might be a worthwhile thing to study. 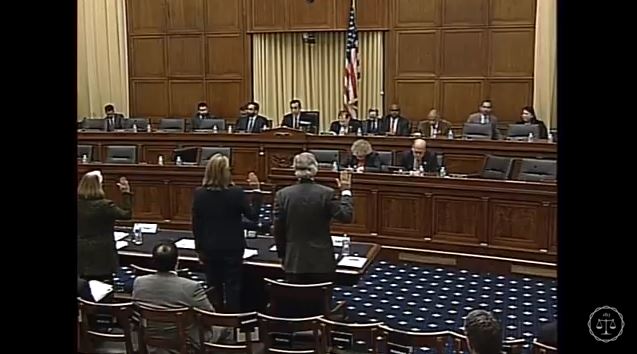 If aftermarket parts were removed from the market by consumer demand or by OEM design patents, then CAPA would cease to exist — and Gillis, as a consumer advocate, would accept it and move on, he said.

“It does not matter whether there’s one CAPA part certified or a million CAPA parts certified,” he said.

CAPA was founded partly by the insurance industry, according to Consumer Reports, and still has insurer representatives on its board and technical committee. Asked if the CAPA-tied insurers have a stake in seeing more aftermarket parts to lower their loss ratios, Gillis agreed it did.

“I hope it does” help them in that fashion, he said. Insurers were aggressively competing on price, and the PARTS Act “enables them to one be more price-competitive for us.”

Pursuing insurance costs was “a very important role” for any consumer advocate, he said.

The Washington Post discussed the same potential conflict of interest back in 1999, after a Consumer Reports article (the text of which was entered into the congressional record that year) on aftermarket parts referenced Clarence Ditlow and Gillis’ connections to CAPA as well as the Center for Auto Safety and Consumer Federation of America, respectively. 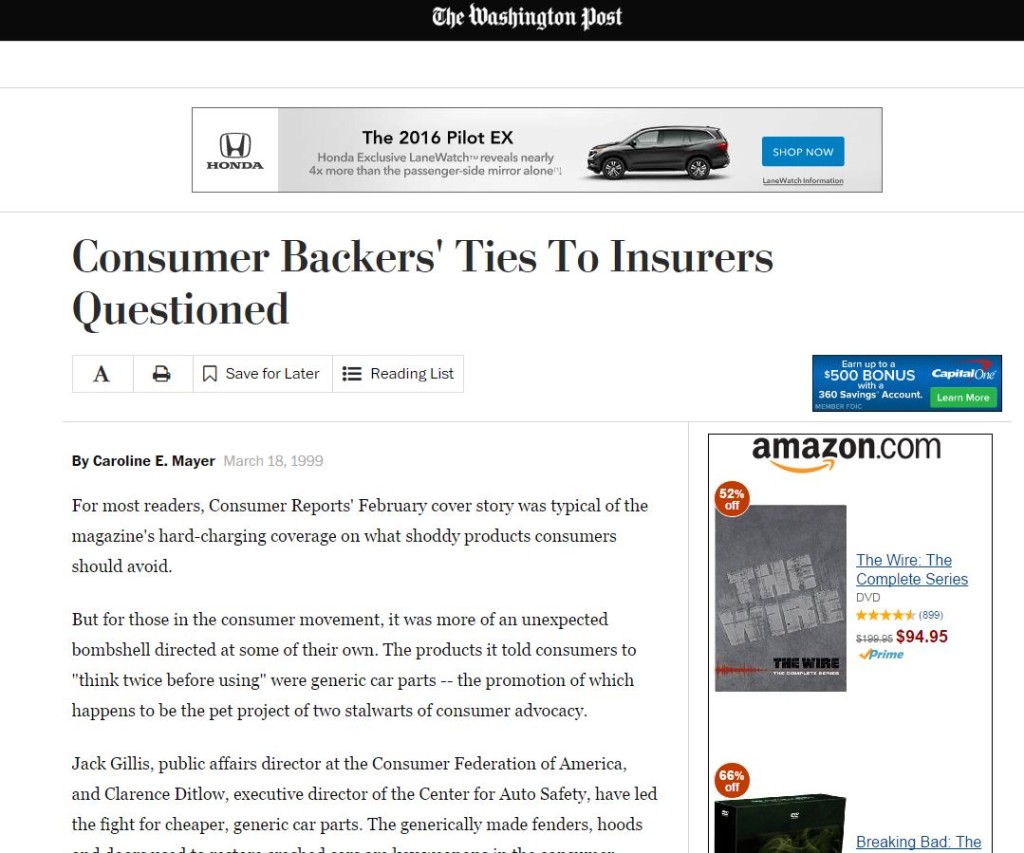 In addition to his job at the Consumer Federation, Gillis is executive director of the Certified Automotive Parts Association, a nonprofit organization founded 12 years ago by insurance companies to test and certify generic auto parts. The group still gets most of its funding from insurance companies as part of their campaign to reduce repair costs. Ditlow, in addition to running the Center for Auto Safety, is one of CAPA’s founders and serves on its board.

When journalists have questioned the quality of CAPA-certified generic auto parts in the past, Gillis and Ditlow have used their stature in the consumer movement to blunt the claims of auto shops that generic parts are inferior to the ones produced by the car companies themselves, according to documents obtained by The Washington Post from a source who has been fighting the use of CAPA-certified parts.

For example, according to a 1998 memo that Gillis wrote to CAPA’s board of directors, when reporters called CAPA questioning the quality and safety of generic parts, Gillis referred them to Ditlow. Ditlow says “CAPA parts are beneficial to the consumer,” reporters “are amazed” and stories are put on hold, Gillis wrote in the memo. …

Gillis and Ditlow, for their part, said they are proud of the work they do for CAPA. They said they believe strongly that CAPA’s work is in the interest of consumers and would do nothing to call into question their status as consumer advocates.

A Washington Post 1999 article, seen in a screenshot here, discussed a potential conflict of interest back in 1999 of Clarence Ditlow and Jack Gillis’ connections to CAPA as well as the Center for Auto Safety and Consumer Federation of America, respectively. (Screenshot from www.washingtonpost.com)