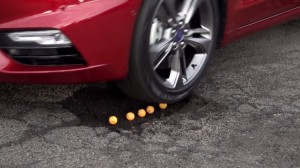 A standard feature on the 2017 Ford Fusion Sport keeps watch for potholes and stiffens the shocks “faster than the blink of an eye” to effectively skip the car over them, Ford announced Thursday.

The technology carries the potential to erase some of what AAA said Wednesday was the $3 billion in damage U.S. drivers annually suffer — and mechanics and body shops earn — from potholes.

“In the last five years, 16 million drivers across the country have suffered pothole damage to their vehicles,” AAA automotive engineering and repair managing director John Nielsen said in a statement Wednesday,  “… On average, American drivers report paying $300 to repair pothole-related vehicle damage. Adding to the financial frustration, those whose vehicles incurred this type of damage had it happen frequently, with an average of three times in the last five years.”

Twelve high-resolution sensors send data to vehicle computers which adjust “continuously controlled” dampers every 2 milliseconds so the suspension feels as good as possible for the driver.

If it finds a pothole — which here in Michigan is also about every 2 milliseconds — the computer stiffens the dampers as much as possible to keep the wheel from dropping into the pothole too much. This way, less surface area on the wheel smacks into the other edge of the pothole.

“The new Fusion V6 Sport substantially reduces the harsh impact potholes often deliver,” Ford continuously controlled dampening expert Jason Michener said in a statement. “Our new pothole mitigation technology works by actually detecting potholes and ‘catching’ the car’s wheel before it has a chance to drop all the way into the pothole.”

Ford videos show the Fusion Sport driving over a pothole without smashing ping-pong balls at the bottom. A competitor’s car — a Honda Accord or Toyota Corolla perhaps, based on Ford’s news release’s boasting — without such a system (and with thicker tires) dents some of the balls.

The system works so quickly that the front wheel has time to warn the rear suspension that a pothole is coming its way. Thus, even if the front suspension can’t get its pothole clench off in time, the rear has enough time to prepare.

The $33,475 Fusion Sport is one of the pricier versions of the Fusion but still in the mass-market ballpark. If the “advanced computer-controlled shock absorber system” works as well as Ford claims once the Sports go on sale this summer, the seemingly affordable technology might be something other OEMs co-opt. So it’s certainly something for aftermarket auto care professionals to watch.

Featured image: A standard feature on the 2017 Ford Fusion Sport keeps watch for potholes and stiffens the shocks “faster than the blink of an eye” to effectively skip the car over them, Ford announced Thursday. (Screenshot of video from Ford Media YouTube channel)