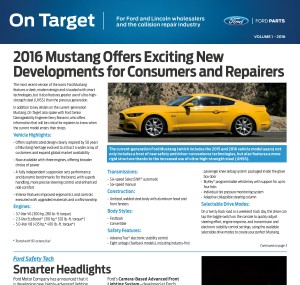 The first 2016 Ford On Target has been released, and collision repairers won’t want to miss it.

Not surprisingly, the next-generation (2015-present model years) aluminum F-150 made a few appearances, including a discussion of its aerodynamics and the steps for replacing its front door skin panels.

The F-150 also indirectly appears in the form of some Fusor structural adhesive guidance.

The aerodynamic discussion is particularly interesting for what it could mean for “pre-loss” condition were angles or properties of certain collision parts/regions affected by a repair or by the use of non-new-OEM parts.  The door skin piece is a sequel to the steps published in 2015’s On Target Volume 3 on the removal of door skins.

Another iconic Ford vehicle, the Mustang, also receives some coverage repairers shouldn’t miss. Ford describes what’s new in the latest generation (2015-present) of the pony car — notably some major increases in the use of higher-strength steels.

After you’re done reading that article, don’t miss the slides from Ford’s presentation at the 2014 Great Designs and Steel conference, which describe even more elements of the new Mustang’s design.

Read the On Target here, share it with colleagues and subscribe or submit story ideas with e-mail at: cphelp@fordcrashparts.com.

Here’s some notable passages from the new issue to whet your appetite:

2015-present Ford Mustang: “’Speaking of UHSS,’” said Bonanni (Ford senior damageability engineer Gerry Bonanni), “’Repairers will find the material throughout the entire front structure of the vehicle and it is critical that repairers consult all service publications and the Ford Workshop Manual to develop a repair plan before any repair is started.’”

“Additional changes included the rear frame rails, which switched from HSLA (high-strength, low-alloy) 350 to DP (dual-phase) 800 steel to allow for the independent rear suspension, while the A-pillars now use DP 1000 steel instead of HSLA 350, as part of the effort to help reduce overall vehicle weight and help increase overall strength. One more change of note regarding the A-pillar is its shift to a hydroformed tube, beginning with the 2015 Mustang convertible, which is a Ford first.” 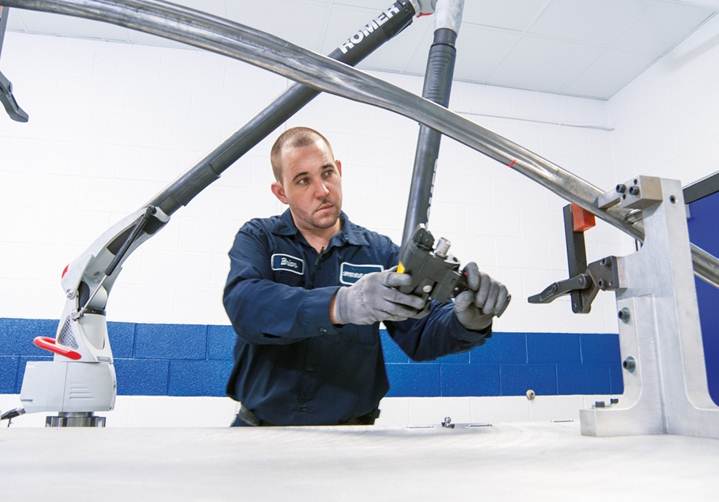 Fusor structural adhesives: “Product work times are based on shop temperature, which are typically quoted in the 70°F-75°F range. During hotter weather the 2K adhesives cure quicker and in cooler weather more slowly. A good rule-of-thumb is that for a 20°F increase in shop temperature, the work time will be reduced by one-half. So at about 90°F, the technician can expect to have only about one-half of the published amount. On the other hand, if the shop were at 50°F, then the work time would be nearly doubled. The most challenging environments are above 100°F, where the work time may only be one-quarter of the published amount!”

Ford F-150 door skins: “NOTICE: Do not install SPR fasteners directly in old SPR fastener location. SPR fasteners must be installed adjacent to the original location. Failure to follow this direction may compromise the structural integrity of the repair. (Ford bolds this in the original.)

“NOTE: Solid rivets or blind rivet fasteners may be used in place of SPR fasteners after enlarging the existing holes to 6.5mm.

Schuler and Midway and Ford contributed to the hydroformed high-strength steel roof rails and A-pillars of the 2015 Ford Mustang. The car is lighter but 28 percent torsionally stiffer than the 2014 Mustang, according to Ford. (Provided by Ford)