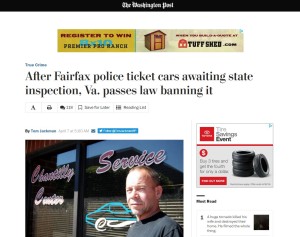 Automotive vehicle inspection advocates should cheer a new Virginia law prohibiting police from ticketing unchecked or expired vehicles — which are in line awaiting an inspection!

The Washington Post reported Thursday that one particularly overzealous parking officer, Jacquelyn Hogue, even once ticketed a customer of Bruce Redwine’s Chantilly Service Center who’d moved inside the shop for an inspection.

Redwine took the ticket out of her hand and was charged with felony assault on a police officer, according to the Post. Since the parking officer wasn’t technically a cop, the charge was dropped to a misdemeanor, the newspaper reported. Redwine says he used what the newspaper called “insulting language” but never touched her; an appeals court jury acquitted him in 20 minutes, according to the Post.

The Mariah Business Center, which houses Chantilly and other shop owners whose customers were targeted by police, had given authorities carte blanche to ticket vehicles on their property, according to the Post.

When (Hogue) entered the industrial park, word spread rapidly and shop employees hustled to move their customers’ cars inside before Hogue could slap a ticket on them. Redwine, who’s been running Chantilly Service Center for 21 years, said he did state inspections and emissions tests first thing in the morning, to make sure no expired stickers were visible, but cars sometimes failed, and repairs sometimes took time.

Neither Hogue nor the center commented to the Post, but a police spokeswoman confirmed that the center’s leadership sought more parking enforcement.

After prior Post coverage, the Legislature bipartisanly and unanimously put the smackdown on the practice with House Bill 213, according to the newspaper, which reported Democratic Gov. Terry McAuliffe has signed it.

That’s a nice win for the shop owners, somewhat responsible (well, better late than never) vehicle owners — the Post reported one owner estimated customers took $60,000 in penalties over six years — and inspection advocates who should be able to debate the issue without this kind of sideshow distraction.

Featured image: After prior Washington Post coverage of cars being ticketed while awaiting inspections, the Legislature bipartisanly and unanimously put the smackdown on the practice with House Bill 213, according to the newspaper, which reported Democratic Gov. Terry McAuliffe has signed it. (Screenshot from www.washingtonpost.com)