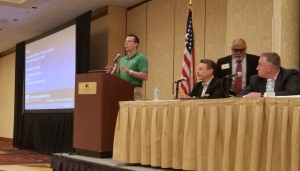 By the time your collision repair workplace has a vacancy, it might already be at a hiring disadvantage, industry figures suggested at the recent CIC week.

Working with nearby trade colleges and high schools to develop skills you need, making an NFL-type effort to woo techs, and taking advantage of a new wave of job fairs might land your shop the staff it needs to fill openings, representatives from CREF, Garmat, and the Collision Industry Conference Education Committee suggested last week in Seattle.

Think the trade programs aren’t teaching techs what they need to be a valuable colleague or employee? Quit complaining and do something about it, they said.

Gene Lopez, co-chairman of the CIC Education Committee and an I-CAR field operations manager, said Thursday a survey on training programs found CTE school students weren’t ready for the job. He noted an interesting trend of shops — particularly MSOs — with their own training programs.

“The biggest constraint to growth is talent,” he said.

The Collision Repair Education Foundation estimates 21,500 auto body technicians leave the industry altogether — “a trend that has increased steadily since 1995,” it states. Meanwhile, another 31,500 stay in the industry but switch jobs annually, and more than 25 percent anticipated retiring or switching jobs within the next 12 months, according to CREF, which didn’t specify the year the data was measured.

Lopez highlighted North Carolina’s Fayetteville Technical Community College auto body program, which uses I-CAR curriculum, as an example to follow. It has 144 students, and its first auto body graduates ever will emerge in May.

All of those graduates had at least one job offer — and many had several, according to Lopez. Some employees were offering relocation and money for tools, he said.

Employers felt FTCC students were “B”-quality techs who could work without a lot of on-job training, according to Lopez. “That’s pretty cool stuff,” he said.

How many repairers would love to employ someone who knew how to remove and replace a bumper assembly, Lopez asked.

“Fayetteville, I’m learning, is delivering that kind of employee to you,” he said.

Lopez proposed the idea of a national “draft day,” in which shops across the country would go to local schools to find employable students.

“We need probably 50 or 60 of those,” said Fix Auto CEO Erick Bickett, whose company has spun off a separate technician development business.

But while the industry embraces NFL models, it might wish to avoid — or at least better explain — signing bonuses, according to S/P2 senior account manager Bob Medved.

The bonuses create too high of expectations for prospective employees as well as bidding wars, Medved said. Certainly, the latter is just a reality of supply and demand, but the existence of such lucrative contracts (sometimes overly hyped by vo-tech teachers, Medved said) could also might leave a first-year tech with an unrealistic vision of pay in their market or what they’ll actually do as a rookie.

Medved said he was discouraged to hear some in the collision repair industry had given on schools.

After all, he told the audience, you pay taxes. “Don’t they owe you something?” he said.

Plus, why should employers (or parents) be content with a college program that produces unusable employees? If a high school couldn’t place students in college, parents would be upset, Medved said.

Medved admitted that the school administration, not the vo-tech program, can be a real problem. He also serves as the chairman of Recycled Rides, a charity whose efforts include using technical students to repair donated vehicles as gifts for the needy, and he said the biggest impediment to delivering even more cars was school administrators.

“Their first answer is always, ‘No. You can’t do that,'” Medved said. But if you keep pushing them and showing them the value, they can bend.

Unfortunately, schools feared the liability such tools could yield, according to Gruskos.

“You’re a vo-tech school,” he said in disbelief at the April 19 Society of Collision Repair Specialists open board meeting.

Some trade schools want to offer more curriculum but quite frankly can’t afford it, according to Hendler. They don’t have $50 for an I-CAR account, nor do they have the $100-plus student amount for the I-CAR welding test.

That “hit me hard,” Hendler said of the revenue lack. “They are struggling, very much,” she said.

Teter said the financial issue extends to the faculty as well. Why would a painter making six figures take a $35,000-$50,000 teaching job, she wondered.

CREF development director Brandon Eckenrode said Thursday some schools (it’s unclear if he meant the high school or community college level) only have $100 per student to spend on technical education — and that could be on the higher end.

Finally, high schools might be graded on how many students go to college — not technical schools, according to Teter. (And a student hired right out of college as a rookie tech also would presumably count against that statistic too, even though the kid has already started an actual career.)

Going back to the NFL metaphor, Medved noted the lack of industry presence — even some MSOs — at SkillsUSA.

“You not showing up … is like a football team skipping the draft,” Medved said. Let the kids compete, and then start talking up your workplace between events.

Smaller shop who can’t travel? No problem. State-level SkillsUSA need the most help, according to Medved.

“They need people to show up,” he said.

And why aren’t you scouting kids even earlier, also like the NFL, Medved asked. Create a relationship with a local school, and promote your shop and the industry even at the junior high level.

Finally, why not look at auto service students, too, Medved suggested. (They clearly have automotive interest and skills.) “Broaden your search a little bit,” he said.

Trade shows are also a way to get qualified technicians, and the Collision Repair Education Foundation — which was holding an event across the hall from the CIC at the Seattle-area hotel — announced it would make it easier for you.

A booth at the Seattle event cost $2,500. “Those amounts will be adjusted,” CREF development director Brandon Eckenrode said Thursday; that way, a large multi-store operation and a little auto body shop don’t have to pay the same amount to attend.

We didn’t recognize any independent shop brands there Thursday, but large MSOs were certainly present.

Teter said the same thing happened when Garmat held a career event (“Neutral ground,” she called it.) for the industry. Many national chains attended, but not local or regional shops. Of course, the cost for a booth was $3,500, though Teter suggested shops could double up on a booth and split the cost.

It’s good CREF will make it easier for smaller shops. But based on Eckenrode’s pitch, even his $2,500 or Garmat’s $3,500 might have been a deal even if one hire is made. (“Students got hired,” that morning, he said at CIC.)

A technician can produce roughly between $30,000 to $50,000 a month in sales for a collision repair company, he said April 18. Large MSOs are in “kind of almost panic mode,” as more than a hundred openings at some companies means millions in lost revenue, Eckenrode said then.

CREF has increased the number of career fairs it offers, and each averages about 200 students. The nonprofit — which has gone from giving $300,000 to schools in 2009 to $15 million in donations — has started to map out its fall and spring job fairs.

“It’s getting hotter every day,” he said, and the industry needed to rally around it.