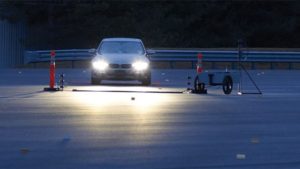 The Insurance Institute for Highway Safety has found yet another class of vehicle with lousy OEM headlights, and its research indicates a repair consideration for auto body shops.

On Tuesday, the IIHS reported that not a single one of 21 small SUVs’ headlights achieved a “good” rating, and only four managed to reach an “acceptable” level through various options.

A majority of the 47 headlight combinations on those 21 SUVs/CUVs flunked the test, the organization said.

“More than two-thirds of them are rated poor, making this group of vehicles even more deficient when it comes to lighting than the midsize cars that were the first to be rated earlier this year,” the IIHS wrote.

In March, the organization found only one midsize car of 31 tested had “good” headlights available as an option, the Toyota Prius v. (And that one earned a “poor” when the car has the standard halogen, unadaptive headlights.)  Ten of those had “poor” lamps across the board. All 31 cars collectively offered 82 headlight options packages available.

The following images illustrate a difference found between the acceptable-rated Honda Accord’s halogen, left and the poor-rated Mercedes C-Class halogen on a straightaway.

Have a luxury vehicle? It didn’t matter in either spate of testing. Nor did advances in lighting like adaptive curving, automatic high/low-beam-switching (high-beam assist) headlights, light-emitting diodes (LEDs) or high-intensity discharge (HID) lights.

“Manufacturers aren’t paying enough attention to the actual on-road performance of this basic equipment,” IIHS senior research engineer Matthew Brumbelow said in a statement Tuesday. “We’re optimistic that improvements will come quickly now that we’ve given automakers something to strive for.”

They’d better strive quickly. The IIHS won’t let you get a Top Safety Pick+ — its highest honor — next year if headlight options aren’t “good” or “acceptable.”

Here’s where you come in as a collision repairer.

OEMs flunked both car and SUV tests in large part with headlight aim. Unlike the government’s tests, which are done in the lab, the IIHS tested real-world conditions by evaluating the cars and SUVs as delivered by a dealership.

“Although the vertical aim of headlights can be adjusted on most vehicles, IIHS doesn’t change headlight aim because few vehicle owners ever do, and some manufacturers advise consumers not to,” the IIHS wrote in March.

The organization tested for the two ends of the problem headlight spectrum: too little light and too much glare.

“Many headlight problems could be fixed with better aim,” Brumbelow said in a statement in March. “This is simple enough to adjust on many vehicles, but the burden shouldn’t fall on the consumer to figure out what the best aim is. Manufacturers need to pay attention to this issue to make sure headlights are aimed consistently and correctly at the factory.”

On Tuesday, he pointed to how SUVs’ higher headlights should often be aimed lower, but often weren’t.

“Instead, many of them are aimed higher than the car headlights we’ve tested so far,” Brumbelow said in a statement.

The same attention to proper headlight aim would seem appropriate for a body shop tech or a mechanic, given how dramatic some of the findings are.

The best of the “acceptable” SUVs were found in a 2016 Mazda CX-3 options package, according to the IIHS, while worst of the “poors” was the 2016 Honda HR-V with halogen low and high beams “inadequate on all four curves and on the straightaway”

The worst of the car headlights were the halogens on the BMW 3-Series, according to the IIHS.

“The low beams illuminate only about 130 feet on the right side of the straightaway,” it wrote. “A driver with those headlights would have to be going 35 mph or slower to stop in time for an obstacle in the travel lane. The system’s high beams don’t reach 400 feet.”

“IN THE DARK: New ratings show most headlights need improvement”

The Insurance Institute for Highway Safety has found yet another class of vehicle with lousy OEM headlights, and its research indicates a repair consideration for auto body shops. (Provided by IIHS)

The images illustrate a difference found between the acceptable-rated Honda Accord’s halogen, left, and the poor-rated Mercedes C-Class halogen on a straightaway. (Provided by IIHS)