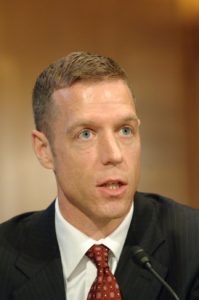 In a new potential disruptor to the auto insurance world, the federal government announced Wednesday it would annually monitor the cost of auto insurance for minority and poor or moderate-income ZIP codes.

Under the Dodd-Frank Act passed after the financial crisis, the Federal Insurance Office was authorized to determine if anything other than health insurance posed access problems to minorities, poor or moderate-income Americans, or underserved people.

“Access to affordable auto insurance is crucial for consumers who commute to work, drive kids to school, and meet the needs of their families,” FIO Director Michael McRaith said in a statement. “This new methodology reflects important feedback FIO has received from a number of key stakeholders, and it is a meaningful step toward better understanding the affordability of auto insurance for consumers and underserved communities all across the country.”

Deciding that the government might want to monitor a product that every state except New Hampshire forces vehicle owners to have, the FIO settled upon auto liability coverage — but not collision or comprehensive. It’ll divide the average premium by the median income at any ZIP code in which the majority of residents are minorities or of little or modest means.

If that average premium isn’t more than 2 percent of the ZIP code’s median income, the feds will consider it affordable.

Stakeholders had unsuccessfully sought the inclusion of collision, comprehensive or other auto insurance costs, with the Consumer Federation of America and New Yorkers for Responsible Lenders both arguing that a poor person or minority (or anyone else) who’d financed a car would have to buy all three forms.

Having one of the optional lines is actually quite common. An Insurance Information Institute study of National Association of Insurance Commissioners data found 72 percent of drivers with liability insurance in 2013 also bought collision, and 78 percent bought comprehensive. (Which is good for insurers as well as shops, as those two lines are typically more profitable for underwriters, according to the CFA.)

The National Association of Mutual Insurance Companies also pointed out that using solely liability premiums would skew the data a variety of ways, as states require different minimum coverages and some also demand personal injury protection too.

But the FIO ultimately felt it had this one right the first time — assess the cost of the insurance that the state actually requires a driver to buy.

“Many variables affect consumers’ decisions on the amount of collision and/or comprehensive coverage to purchase,” it wrote in the Federal Register. “For example, risk-averse consumers or consumers seeking asset protection may purchase the maximum amount of coverage available, while risk-tolerant consumers may purchase only the mandatory minimums. By including collision or comprehensive coverage in its calculation of the Affordability Index, FIO would introduce unnecessary confounding variables unrelated to affordability into an already complex analysis. For these reasons, FIO will limit the calculation of the Affordability Index solely to premiums for mandatory liability coverage.”

Though the NAMIC raised a concern with only using liability, Allstate, the American Academy of Actuaries, National Association of Professional Insurance Agents and Property and Casualty Insurers Association of America all supported only using a single line of insurance.

The PCI also released a statement Wednesday on the new monitoring.

“PCI appreciates FIO’s collaboration and constructive focus on the mandatory minimum auto insurance low-income consumers need to own a car,” PCI policy development and research Senior Vice President Robert Gordon said in a statement. “We remain concerned, however, that the final methodology remains flawed by declaring an artificial income level to determine affordability without reference to other household expenditures or consideration of risk or cost drivers as PCI had suggested. Individual finances, wealth and discretionary income may vary greatly from family to family. For most consumers, the cost of buying a car and maintaining and fueling it far exceed any insurance costs, making the regulatory fixation with insurance affordability somewhat misdirected. In particular, rapidly escalating distracted driving, traffic congestion and alcohol and drug use have been negatively impacting auto accident frequency and loss costs, which are the primary determinants of insurance rates and affordability.  PCI will continue to work with FIO and state insurance regulators to develop real solutions addressing these concerns.”

It’s too early to tell what this will actually mean for third-party damage claims. You could come up with a variety of scenarios that sort of make sense, including:

But it’s likely to have some sort of effect on body shops, so as a member of the industry — or as a taxpayer — it’s probably worth keeping an eye on what the FIO finds and what the government does with that information.