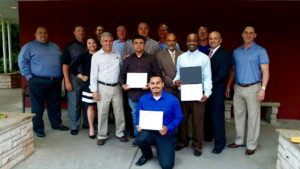 Service King announced Tuesday three students have graduated its Apprentice Development Program, the first of 50 technicians the multi-shop operator hopes to produce through the initiative this year.

The new techs received competency testing and hands-on training for a year at a Dallas Service King under the oversight of 20-year automotive veteran Ralph Gonzales. The Dallas Morning News reported last year that Gonzales, who made more than $100,000 annually for years as a top body man, was about to retire.

“When this came along, I realized I could change these kids’ lives,” Gonzales told the newspaper. “I wouldn’t pass that up for nothing.”

Service King plans eight other similar pilots nationwide, all capped at three students to “provide intimate learning environments and promote direct oversight,” according to the MSO.

The Dallas Morning News reported in 2015 that the first batch of apprentices would start out at light body repairs and move up to more intensive damage during the course of the program.

“This is an extremely proud moment in the young careers of these talented technicians who represent the future of Service King and our industry,” Service King President Jeff McFadden said in a statement. “The Apprentice Development Program was built to provide an unprecedented avenue to rewarding careers as body technicians across our family of repair centers. We couldn’t be more proud of this class for paving the way for future technicians in the program and for taking the first step in a long, promising career.”

Service King has begun recruiting for its fall classes. Learn more or look for a job at www.serviceking.com/careers.

Featured image: Service King announced Tuesday three students have graduated its Apprentice Development Program, the first of 50 technicians the multi-shop operator hopes to produce through the initiative this year. (Provided by Service King)