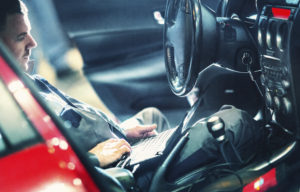 An email to some Midwestern direct repair program shops implying pre- and post-repair scan times would be capped at 0.5 hours was “incorrectly modified and sent in error,” American Family clarified Monday.

American Family media relations consultant Ben Corey explained that the times were meant to be a starting point only.

A local DRP claims adjustor had sent the email to numerous direct repair program shops, directing them to always provide documentation and listing a time of 0.5 hours at the mechanical rate for the pre- and post-repair scan.

Ironically, while demanding documentation, the email (a redacted version of which is shown below) also references FCA, Nissan and Honda‘s requirements for some combination of pre- and post-repair scans. 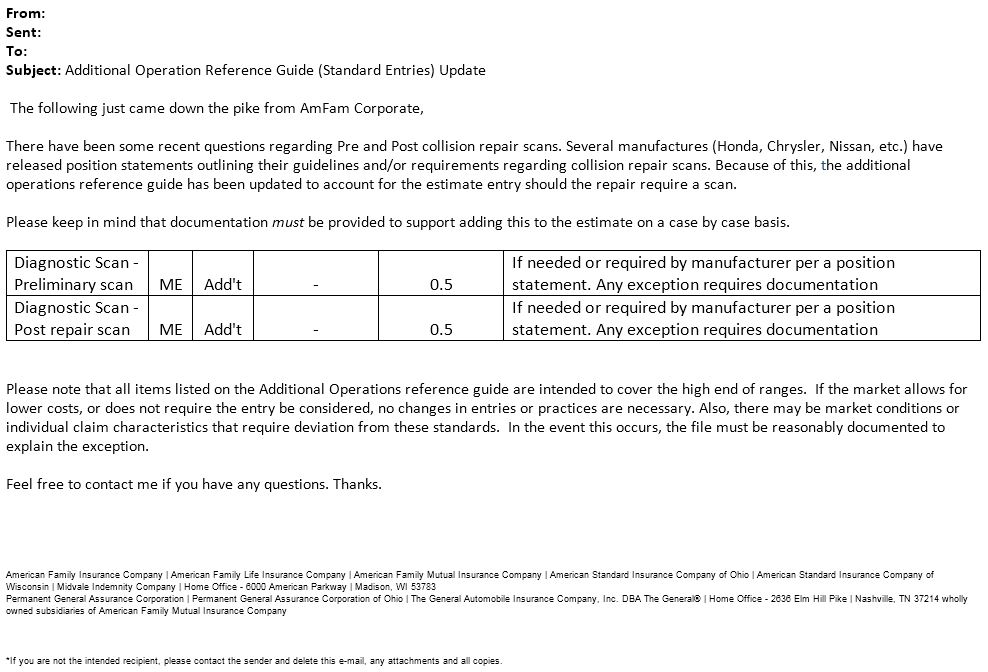 The time seems completely arbitrary. Both CCC and AudaExplore list the procedure as not included. Mitchell’s only reference to scans involves its time for an entire airbag-related procedure that includes a scan. Doug Kelly, CEO of scanning middleman Collision Diagnostic Services, said that airbag work is different from the pre- and post-repair scans.

On top of this, the adjustor acknowledges three top OEM’s positions on scans but still demands documentation. (Two days after that email, a fourth, Toyota, released a similar position statement.)

Fortunately, the adjustor was wrong and another example of the kind of disconnects which can occur between insurers’ corporate offices and the regional levels. Here’s a few other ones we’ve covered:

All of these highlight why communication and instruction from the regional level or otherwise not contained in the B2B contractual documents should be carefully reviewed and sometimes questioned.

“It looks like the document you received was incorrectly modified and sent in error,” Corey wrote. “But I can clarify our process:

“The estimated labor times given for pre- and post-repair scanning and diagnostics are simply starting points and are based on past experiences with repair shops. If the labor takes longer than the estimated time, then cost is negotiated on a case-by-case basis and American Family compensates the repair shop for the work as appropriate. This process applies to all repair shops. American Family is committed to working closely with repair shops to ensure their work is correctly compensated for – we do not expect our customers to pay out-of-pocket costs for scans.”

The last sentence is important. CCC in the 2016 Crash Course reported mechanical labor rates on its estimates averaged $80.48/hour in 2015.

At a strict limit of 0.5 hours a scan at that rate, a shop would have to pass costs to customers or lose money performing an operation that is deemed to be necessary by a growing list of automakers to ensure advanced safety and convenience systems are returned to pre-loss condition.

Collision Diagnostic Services, which remotely scans vehicles using OEM tools, charges $119 for the first scan and $50 for the second if you go with its pre-/post-package. (All four OEMs say either you certainly or likely need to perform both scans.)

We’re still trying to track down a dealership ballpark of what a scan costs, but a repairer has told us dealers in his area generally can run about $100 just to plug in a scan tool once. So you’re losing even more under those conditions.

So if a body shop were to adhere to American Family’s 0.5/0.5 labor hours, they have automatically lost money with the sublet — and that’s before any markup and the associated labor invested into the process by the local technician. (Texas-based CDS scans the vehicle remotely, but someone in the client shop still must hook up the asTech and initiate the scan.)

The only other option would be a large upfront and ongoing expense — we’re talking thousands of dollars — to buy all the various OEM scan tools relevant to your market and pay the annual rates for all the scanning software. (See the National Automotive Service Task Force website for more insight on costs.) Some electronics work, such as that related to security systems, still might require sublet.

The automakers with position statements don’t vouch for anything but their own scan tools, which mean a shop, insurer and customer are risking liability or at least a bring-back for using inadequate aftermarket versions. Kelly conceded that a shop could probably at least get an idea of vehicle issues on a pre-scan with an aftermarket tool, but using non-OEM scan equipment and software on the post-scan risks false positives or missing codes.

Of course, a repairer risks the same problems with the aftermarket tools pre-scan. Get a false positive with an aftermarket tool, and a tech wastes time trying to solve that problem. If the aftermarket pre-scan misses something, then the techs repair the car without addressing that omission — only to reveal the problem with the OEM post-scan and have to supplement and blow the delivery date.

CCC Director and industry analyst Susanna Gotsch estimated the average CCC shop posted 1,089 repair orders in 2015. So a repairer could recoup that upfront OEM scan investment eventually, but that’s assuming the shop charged an appropriate amount for each operation performed to generate a profit and amortize the cost of the scan tool and ongoing associated expenses for updating the data.

But if you’re not a direct repair program, you shouldn’t have to settle from an arbitrarily established reimbursement rate for the services you render. You’re running a business, and as Collision Advice and CRASH Network’s “Who Pays for What?” surveys and common sense/Statistics 101 dictate, an industry will have a range of prices. So it’s up to you to determine your own posted rates and fees. It’s not like all the insurers charge the same for an auto premium.

Even if you are a direct repair program shop or national chain, there’s no reason you should automatically fall into line for a mandate from the insurer, even assuming that it is corporate policy and not a local interpretation. Be familiar with the terms of the contract you negotiated and the operations necessary to fulfill your commitment to quality.

An email to some Midwestern direct repair program shops implying pre- and post-repair scan times would be capped at 0.5 hours was “incorrectly modified and sent in error,” American Family clarified Monday. A redacted version of the email provided to Repairer Driven News is shown here.