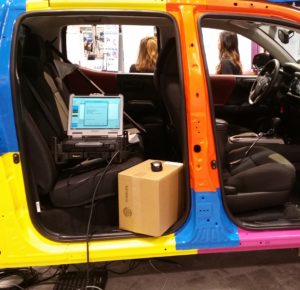 Automakers last week detailed just how crucial calibration is for collision repairers — not just for newer safety and comfort systems but older vehicle technology as well.

Perhaps one of the most vital: the occupant-detection or occupant-classification system which either triggers or doesn’t trigger an airbag based on the weight of the adult or child seated there.

Matching the wrong airbag “decision” with a person too light or too heavy could result in that person being injured by the deployment or withholding of the safety feature.

“The outcome will not be good” Eric Mendoza of Toyota said during the NACE panel of six automakers, two insurers, one third-party scanning company and moderator Mike Anderson.

The sensor “turns your seat into a bathroom scale,” Chris Tobie of Honda explained. Throw a bathroom scale at the wall, and you wouldn’t expect it to work properly, he said. Subject a seat to a collision, and there’s the same problem.

The sensor can be so sensitive that it registers an HVAC dash blower turned to high, according to Tobie. “It’s a precision instrument,” he said.

Mendoza agreed, and told anyone doubting this to visit the Toyota booth housing a 2016 Tacoma. Toyota would demonstrate how a calibrated seat system set at zero pounds would fare with a hard whack.

“It’s not zero, where it was,” he said. (He gave us a demonstration Friday issues. It’s true.)

For Honda, there was no dash light to indicate an issue with its OCS, Tobie said. It had to be scanned and properly calibrated.

Other items besides the seat sensors require calibration. Some advanced driver assistance systems require technology be aimed at a special target, often checkerboard-shaped, Tobie said. Dealers already have these, he said.

“The targets cross multiple model lines,” Tobie said of Honda’s equipment. It’s about $2,800 for the gamut of physical targets, he said. You’ll also need to get the software, of course.

Forward-collision warning systems on the road look for right, left, and center edges of lanes, according to Tobie. Sometimes, you can test-drive the system and calibrate it. But snowy conditions, bad lane markings, or checkered signs on the side of the road could throw it off.

Brian Wayne of FCA pointed out that a windshield replacement could throw off other forward-looking safety sensors behind it (usually found around the rear-view mirror) if the aftermarket glass had waves — you’d have to recalibrate.

He recalled Honda’s video on airbag timing and exploding watermelons: A fraction of a second matters.

“I don’t want to take that chance,” he said.

What would happen if you shot for the moon and were off by 1 degree, Mark Allen of Audi said. You’d miss it. Well, what does 1 degree mean when a vehicle system looking down the road and is off by a degree, he asked.

Audi demands targets be used on certain systems, Mark Allen of Audi said. They’re rentable from dealers, he said. Calibrations also demand center-lining a vehicle, and Audi requires a weighting component to the alignment as well.

Mendoza demonstrated a box full of Toyota calibration equipment on Thursday. See within Collision Hub’s full-session video above (around 23:10), or watch ours below of solely the demonstration.

Eck said that as far as calibration went for GM, he was speaking to a lead engineer last week, and they concluded “we haven’t done enough” in terms of education about calibration.

Anderson asked Eck and Wayne if even plastic filler in a bumper cover could affect sensors, and both the GM and Chrysler representatives said that sounded correct.

Miller said Nissan was still working on a zero-point calibration position statement, but “I do know for certain” every time a seat is removed and installed requires it be calibrated. The same would go for any component in the airbag system.

He also described how any bumper with a sonar system would have to be replaced by an OEM original, not repaired.

Allen also pointed out the fact that not just the customer and their passengers could be impacted by a shop’s foulup. “There’s a broader impact,” he said, referring to surrounding vehicles.