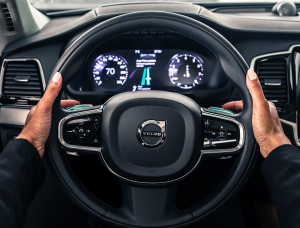 While Uber plans free self-driving car rides with a human backup, according to Bloomberg, and more OEMs plan Tesla Autopilot-like systems for the market, frequency might not drop quite as far as it would seem.

Besides other “dumber” vehicles and animals getting into collisions with the semi-autonomous cars, some crashes could result from the transition from human to machine and back again.

Lextant CEO Chris Rockwell, whose company studies human experiences and behavior, estimated at Megatrends USA earlier this year that for the “forseeable future … there will be turn taking” between the driver and car.

This demand would present a reaction-time challenge to OEMs, drivers and computers, and Rockwell suggested other motorists receive some notification from the semi-autonomous vehicle, sort of like a student driver sign.

Rockwell said research found a human alerted by a vehicle to take over needs 5-8 seconds to assess the situation and get back to the mentality of a typical driver.

One way to help shave seconds might be to smooth the transition from human to computer and back again with communication of some sort, according to Rockwell.

The car tells you, “I will be ready soon” and then “I’m ready.” Or vice versa: “In 5 minutes, I’m going to need a human driver.” Volvo plans to use this concept in its self-driving XC90 test in Sweden: “The exit’s coming up soon, and so you, human, must take over.”

Rockwell also pointed out the issue of a vehicle fighting the driver, as some-lane keeping technology can do. (The Insurance Institute for Highway Safety also reported earlier this year that lane-departure warnings were so annoying that up to a third of drivers in a study shut them off.)

Rockwell said he particularly liked the Valeo idea of “eyes almost on the road,” in which a driver gets some supplemental information on their phone. Valeo says it can cut that 5- to 8-second reaction time through these means, he said.

The communication means itself is tricky. An Audi wheel in a 2015 test had two buttons controlling the self-driving feature. Haptic feedback (vibrations, etc.) can also help, but there are issues, he said.

How a human processes data through one of their five senses (in this case, touch) can cause them to lose focus on another, Rockwell said, giving the example of talking on one’s phone and missing an exit.

Nexteer director of future engineering Jeff Zuraski agreed that there needs to be an easy way to for the human and A.I. to communicate and take control, giving the example of park assist. However, he said it might be simpler just to eliminate the steering wheel and put the decisions on the car itself.

In that situation, it’s “actually a simpler problem,” he said.

That’s what Ford just announced for 2021 taxi fleets and Google has famously planned for a while. The Associated Press reported that Google’s cars would still an emergency stop button — but that’s all a driver could control.

Zuraski said that some sort of user interface would probably still be necessary. But like Rockwell, he noted the time for a human to take over is “almost an infinite amount of time” compared to 20 milliseconds with a machine, he said.

And just because it’s funny, here’s one final thought on the ramifications of computer-controlled cars versus human ones. “I’ve seen ‘I, Robot’ … but I’ve also seen ‘Mad Max,'” Michigan Department of Transportation Director Kirk Steudle said at Megatrends.