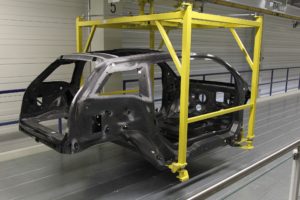 BMW is evaluating whether to switch the next-generation i3 from carbon fiber to all-aluminum or mixed-materials versions using 5-6 different substances, Automobile reported last week.

The second-generation i3 should appear in 2022, according to the magazine, which also reported that BMW would likely keep its volume to under 10,000 annually until 2025.

In commenting on the Automobile report, CarScoops hypothesized going to a cheaper construction would make the car a closer competitor to the Chevrolet Bolt.

Though the i3 is a BMW and starts in the $40,000s for the extended-range first-generation version, tax credits kick it down to the $30,000s now — probably not quite the promised Bolt territory (or arguably mileage), but close.

The electric-only first-gen i3s were even cheaper, but the range wasn’t as high (72 versus 150 miles with the gas extender). Of course, if you only use the i3 in a city, range doesn’t matter as much.

BMW hasn’t given up on carbon-fiber, however, according to the magazine. Automobile wrote that BMW’s Project i20/iNext’s vehicles (known as the i5 or i6) will use “the hybrid aluminum/steel structure used in current BMW sedans, with recycled carbon fiber used wherever possible.”

That sounds similar to what’s been reported for non-electric BMWs: aluminum and carbon-fiber reinforcing steel a la the 7-Series unveiled in 2015.

As for the carbon-fiber i8, Automobile didn’t discuss its body design but said a new generation slated for 2022 might arrive in 2023, with a 750-horsepower, all-electric motor and a 300-mile range. Also, the suspension “scans the road ahead,” Automobile wrote.

The suspension sounds like the pothole-fighting tech Ford and Jaguar Land Rover described over the past two years — another tech consideration for shops to watch, both for reduced damage from crummy roads but a higher cost and effort to replace.

“BMW Doubles Down on EVs”

Featured image: A BMW i3 carbon-fiber body can be seen at a Leipzig, Germany, plant in this photo provided in 2013. (Provided by BMW)