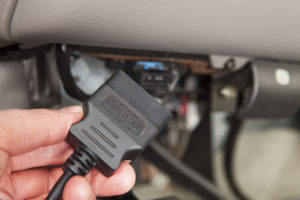 Aftermarket scan tools raise uncertainty and may lack full support for newer models, OEMs argued this month during a panel on diagnostics in collision repair.

“We know ours is right,” FCA’s Brian Wayne said, noting his company had seen aftermarket versions miss codes. “… We hope you get it right. And hope is not a strategy.”

“No, they’re not the same,” Mark Allen of Audi said — there’s just not the same level of diagnostics, he said.

“The only one we’re comfortable with is ours,” Justin Miller of Nissan said.

“By requirement, we have to support our car 100 percent,” Chris Tobie of Honda said. That company’s scanner has to be right — “it’s a cost of doing business; we have to do it.”

GM’s John Eck, like some of his colleagues, observed that “we haven’t tested or validated” any aftermarket scanners.

“We can guarantee what our scan tool will do,” Toyota’s Eric Mendoza said, calling it “absolutely the best piece of equipment” for his company’s vehicles and ready to support a car the second it comes off the line.

He also noted that Toyota’s TechStream scanning system — and its technical information for service and mechanical and collision repairs — would be able to receive an update immediately during the life of the car.

“Updates happen to these things,” he said.

Moderator Mike Anderson of Collision Advice pointed out another consideration for collision repairers. As one works on a car, a “cyber-fingerprint” of sorts appears — procedures like a door handle R&I, for example, will result in a fault code.

Aftermarket scan tools, in his experience, “quite commonly” miss the codes developed during the repair process.

He urged shops to ask an aftermarket scan tool manufacturer about their systems’ capabilities.

Learn more from OEMs about scanning their vehicles and hear about scanning solutions from automakers, third-party scan tool manufacturers and other providers at “Restoring Vehicle Functionality through Electronic Technology and Diagnostics” on Nov. 3 at SEMA. The session is part of the 2016 OEM Collision Repair Technology Summit hosted by the Society of Collision Repair Specialists during the Repairer Driven Education Series Nov. 1-4. Register here.

His company’s asTech system — and the next-generation asTech2, which just hit the market — is technically a third-party system, but it effectively just serves as an extension cord from the vehicle and the shop to OEM scanners and techs housed back at CDS. Thus, it was cited as an acceptable substitute by a couple of OEMs at the panel. (Not all OEMs formally endorse it, however, as they can truly only be certain for their own in-house option.)

“There’re some really good aftermarket tools,” said Kelly, whose company tests them and in its earlier years used some too. But the discussion had raised “some really good points.”

“The aftermarkets have to play catch-up,” he said.

Mechanical service and repair companies typically aren’t going to get new models for a while, which gives the aftermarket companies time to better match the OEM scanners.

“Collision shops are getting cars right off the assembly line,” Kelly said.

Aftermarket scanners also don’t have build data — “what came on the car to begin with,” he said. With advanced safety systems, or even comfort features like heated steering wheels, there’s more potential for DTCs — but that might not be noted by the aftermarket scanners.

Finally, there’s a bit of forensics involved with collision repair diagnostics, Kelly said, citing CDS’ experience. The company hires technicians from dealerships (“Sorry about that,” he joked to the OEMs) and “they’re used to looking at whole cars.”

But in a collision repair, you’ve got cut wiring harnesses, blown fuses, components left on the side of the road. It’s more complicated, and you need to do your research and know what you’re working on, he said.