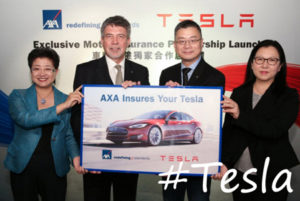 A brochure, policy and websites indicate Tesla has offered or will offer auto policies in Hong Kong and Australia in conjunction — including a provision that a total loss would be replaced by a completely new car within 2-3 years.

A few other items of special interest to collision repairers:

Rental cars: The Australian brochure indicates a policyholder can have up to $2,500 (Australian dollars) total for a max of 14 days.

Insurers: As noted above, the Hong Kong program uses AXA in what the insurer describes as an exclusive deal.  The Australian version uses QBE Insurance and sells it through a partnership between Marsh Advantage and Tesla; exclusivity is unclear.

It’s unclear how long this program existed. Electrek reported on the program Tuesday, yielding interest from other news outlets (and admittedly, that’s where we first heard about it). However, AXA announced the Tesla partnership in late 2015.

Tesla websites for the Hong Kong and Australian InsureMyTesla programs now redirect to other content, but it’s possible to still access the webpages through Google caches. Here’s Australia, and here’s Hong Kong. The brochure still is accessible through Tesla’s Australian site. “As a market leader in motor insurance, AXA Hong Kong is delighted to partner with Tesla to offer differentiated and innovative insurance plans tailored for Tesla customers, demonstrating our commitment to provide customer-centric solutions,” AXA Hong Kong CEO Stuart Harrison said in a statement. “… This exclusive partnership further expands our distribution network, and strengthens our leadership position in the motor insurance market. By working with Tesla, we establish a strong foothold in the electric vehicle market, an exciting segment that offers significant growth potential.”

A request to Tesla’s press office about any U.S. insurance plans late Wednesday morning has not yet been returned. Electrek says it hasn’t received a response either.

This promotional image from AXA was used to announce the partnership between the insurer and Tesla in Hong Kong. (Provided by AXA)

The cover of an AXA InsureMyTesla sample policy. (Provided by AXA)