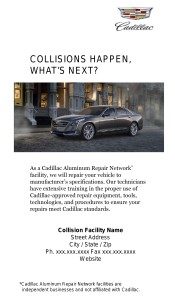 Though the explosion in technology has created new friction between shops and insurers over issues of cost, safety, liability and customer service, last month’s NACE and CIC events suggested some opportunities for collaboration.

Earlier, we looked at the idea of giving customers a more accurate “delivery date” ETA. Today, we look at the idea of repairers turning away work for which they’re not qualified, which drew support from leading national insurer representatives during a NACE panel.

For insurers, it could grate to see work referred to a higher-priced shop in — or out — of a direct repair program network. For a collision repairer, it could be a blow to the ego — and wallet — to send a customer away. But whatever the hit to both businesses’ livelihood, there’s a more important interest: The customer.

Moderator Marcy Tieger, principal of Symphony Advisors, observed that collision repairers already seemed to be spending a great deal on tools and training and creating what seemed to be an “echelon of specialists,” and insurers seemed receptive to such shops getting the work.

Allstate claims director Clint Marlow said it was important that the insurer had direct repair program shops who will refer to specialists, noting that there’s “no shame” when his doctor refers him to another physician.

If someone came to Allstate and sought garage-keeper’s insurance, “we wouldn’t wing it,” he said, joking also that he doesn’t ask his accountant about establishing offshore accounts.

“All these other industries have figured out how to raise their hand,” he said at a NACE MSO Symposium panel Aug. 11.

Corporate claims repair network process director Chris Andreoli said Progressive had seen this already with the aluminum-and-steel F-150. Ford and Assured Performance, whose CEO has already predicted shops someday might specialize down to particular models, have even created a network of shops certified to have the training and equipment to fix the trucks. (Repair output isn’t yet audited, unlike other certification programs and potentially an anticipated GM network. However, Assured Performance has created a photo-documentation system to “show your work.”)

Andreoli called such specialization the future, but he argued that it was perhaps less useful to be OEM-certified, as in the Ford example, than it was to be simply certified by somebody.

As for No. 1 auto insurer State Farm, claims director Russ Hoffbauer said it was up to each Select Service repairer to decide what his or her business would do in terms of specialization.

And just Thursday, Sean Carey of SCG Management Consultants noted on a VeriFacts Guild21 call that as a response to greater OEM interest in the collision repair process, insurers appeared to be saying “’maybe it is time we give some more thought’” to which shops can fix a car properly and which ones can’t.

“Frankly, there aren’t very many shops capable of repairing the technology that’s in the market today,” Carey said. Collision repairers and other experts have proposed such specialization as well, and luxury OEMs have effectively forced the issue by refusing to sell structural parts to body shops uncertified for their various models.

Most recently, Cadillac banned providing such parts or measurements on the aluminum-and-steel CT6 to anyone not on its repair network. Tesla has yet to announce a position on the mass-market Model 3, which easily could sell in the six digits, but it won’t sell structural parts to uncertified shops on its other vehicles.

“Our industry is no longer a trade,” then-SCRS outgoing Chairman Ron Reichen said then.

Ken Boylan, research and specifications manager for Chief Automotive Technologies, gave the example of a $40,000 repair on an $80,000 vehicle that a shop had to buy back after sectioning it incorrectly.

So if you don’t know how to do something, “I tell people don’t do it,” he said.

And perhaps most famously, a Catawba County judge ruled in December 2015 that a Charlotte, N.C., Chevrolet dealership must pay more than $438,000 in triple damages, attorneys fees and costs following an inadequate repair of a Land Rover LR3 — that probably should have been a total loss.

In court, a technician reportedly testified he never accessed OEM repair procedures for the job, nor would he know where to find them.

But specialization as with the medical field can with it bring the concept (and felt by health insurers and customers with co-pays) where, say, a kidney doctor costs more than a G.P.

For an insurer counting on direct repair program shop concessions, that can be tough to swallow. One shop-insurer lawsuit famously alleged a petulant GEICO representative vowing to a Porsche-certified non-DRP shop, “We aren’t going to change our labor rates because it’s a Porsche.”

Hoffbauer said it was pure supply and demand, and being the only shop able to complete such a procedure might mean a business must charge more.

Marlow allowed that linking the cost of training and equipment back to labor rates was “certainly one way to look at it.”

However, Marlow also argued that such an investment ought to be amortized over years — not months. (An interesting argument, though Allstate has been aggressively raising its rates quarterly to reflect current market conditions.)

He also pointed out that shops made technicians buy their own tools, and not necessarily paid them enough to reflect this. If you looked at body tech compensation, had there been “wholesale change?” he wondered.

Andreoli said competitive forces might dictate specialization, and it would probably change things from a shop rate perspective. Moderator Marcy Tieger asked if higher rates would differentiate DRP shops, and Andreoli said it would, though neither he or Tieger elaborated on what exactly that meant.

Farmers strategy manager and technical adviser Gerry Poirier said simply that Farmers cared about shops having training, customer experience and equipment, and “the rates’ll take care of” themselves.

However, he wonder if the Ford F-150 was really so groundbreaking, given the existence of aluminum hoods. (Yes — at least for non-luxury repairers and OEMs. See more here and here.)

Getting new equipment certified to work on such vehicles can take two years, he argued, and that’s something that OEMs need to tackle and “make it more competitive.” OEMs like Ford have tried to list requirements based purely on equipment specifications, not brands, but any repairer with a shop full of rivet guns can certainly relate to his frustration. “You may not be able to serve both parties,” Marlow said, referring to “competitive parts” requirements in insurance DRP agreements upon which shops agree to use certain percentages of cheaper aftermarket imitation or used parts instead of higher-priced ones from auto manufacturers.

Poirier suggested just better educating customers, something that Farmers tries to do. The company already sells an OEM parts insurance endorsement, and perhaps it stresses this point further.

On the other hand, there’s the strong potential for more and more OEM parts to become structural or impossible to substitute aftermarket imitations for without risking the customer’s safety because of technology (i.e. sensors, cameras, notifications) in or behind the component. OEMs using more advanced substrates and refreshing vehicles more frequently also will affect the ability of an aftermarket part to accurately and profitably achieve “like kind and quality.” The only real stumbling block to specialization would be if some insurers attempt to demand a network or cheaper specialist nowhere near the customer. In the Porsche allegation above, for example, the GEICO claims supervisor allegedly threatened to tow the vehicle three hours away — or further — to save money.

(A claims supervisor) advised (GEICO) will only pay prevailing market labor rates (again $44), and if the customer is not satisfied “we’ll tow the vehicle to [another] shop that certified”. When advised that was Raleigh (3 hours away), (the supervisor) said “we’ll be glad to move it Raleigh; we aren’t going to change our labor rates because it’s a Porsche.” K&M asked if the Raleigh shops’ rates were similar to K&M, would they tow it to Atlanta, (the supervisor) replied: “We’ll  make that decision if we need to.” And further, “I’ll move it whatever shop has the equipment, I’m not going to change my labor rates for you.”

In a similar vein, Democratic California Insurance Commissioner Dave Jones’ agency has reported complaints of insurers inconveniencing with time and distance customers who wish to use a non-DRP shop. He’s proposed new regulations on how far customers can be sent for services like inspections.

The insurer can still request the customer go somewhere other than the non-DRP shop for an inspection, however, but the restrictions will specify just how far that that can be. The trip can’t be longer than 10 miles in urban areas with 100,000 or more people, and it can’t exceed 25 miles anywhere else.

“With regard to the mileage restriction, California is the most urban state with 95% of the population living in just 5.28% of the geographic area. Given the urban nature of nearly the entire state and the flexibility for the insurer to waive the inspection in lieu of an estimate by the claimant, the economic impact of this provision should also be very small,” the DOI wrote.

That problem might take care of itself before the lawsuit or regulation stage given aggressive insurer competition for customers. If a carrier treats a policyholder badly, they’ll jump ship or report the shoddy service to officials like Jones or peers through word-of-mouth and the Internet.

While only Cadillac dealerships can use Cadillac’s trademarks or corporate signage, independent shops are allowed to advertise they’re part of the Aluminum Repair Network. Pictured is part of a sample advertisement. (Provided by Chrysler)

This NACE 2016 display demonstrates all the advanced materials on the 2017 Chrysler Pacifica — including a magnesium-aluminum tailgate. (John Huetter/Repairer Driven News)