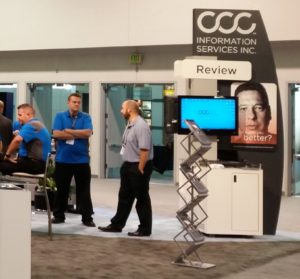 It could assist a user such as an insurer (or OEM) to direct a driver to a body shop — or a total-loss auction — appropriate for broad categories of damage and determine if emergency services are necessary, CCC corporate strategy Senior Vice President Marc Fredman said. Not only does that help an injured customer, it avoids wasting shop and insurer cycle time and money.

CCC Drive wouldn’t at launch prepopulate an estimate and calculate likely damage and labor hours down to the unit, Fredman said. It’s simply classifying a battered vehicle along the lines of light, heavy, total-loss damage, etc.

That combined with the transparency of the data — unlike photo estimating models or labor surveys held internally by insurers, CCC will provide telematics information to collision repairers — might start the conversation between customers, insurers and repairers on a more equal, more trusting plane.

By going broad, it might also avoid some of the problems and concerns with the other two formats, such as allegations of short-pays based on “it doesn’t look that bad” desk reviews and stale data or contractually lowered direct repair program costs being used to make the case for all broader appraisal values.

Fredman said a key variable for CCC’s predictive analytics is delta-V, a scientific term for the change in velocity experienced by an object. This can be calculated reasonably well (as can impact direction) using smartphones today, and “extremely well” by OBD-II plugins and the cars themselves, he said.

Smartphone accelerometers don’t accurately register collisions as well at slower speeds, nor can they access comprehensive internal vehicle data. (Though as Hyundai’s app suggests, it’s probably not a stretch for a phone to do so if an OEM wants it to happen.)

Fredman anticipated smartphone low-speed capabilities would improve, though ultimately telematics would rely predominantly on OEM data as automakers include such capabilities into more and more of the U.S. fleet. But for a while, telematics analysts will have to know how to use all three sources.

Other data might also be present from those three platforms, and CCC works to pull together whatever it can get from those sources and their tech (for example, sensors, GPS, magnetometers and gyroscopes) following a collision incident.

“There’s all this different information out there,” Fredman said. As with other “big data” wranglers, part of CCC’s job involves simply compiling and outputting this varied and potentially nonstandardized data into something useable by its repairer and insurer clients.

“That’s not trivial,” he said.

The point was to offer clear, “high value” analysis of vehicle data for its various clients at launch, according to Fredman. What it developed next was somewhat up to what it heard from its customers like OEMs, insurers and repairers.

‘There’s gonna be a lot of discussions and engagement with a lot of different customers,” he said.

What those users did with the data was up to them. CCC, for example, wouldn’t make the call about which shop to recommend to the customer based on the damage, according to Fredman.

“That’s all up to the carrier,” Fredman said.

Each carrier might act differently based on its own internal rules and what the particular customer wanted. For example, a customer might not want crash assistance, but he or she might wish to have CCC DRIVE autofill a FNOL questionnaire with their data (VIN, etc.) to avoid the inconvenience at the scene.

Though CCC’s merely providing a triage service, even that broad modeling might still carry the potential for flaws based on the “garbage in, garbage out” issue any models contain. After all, some of the financial sector casualties of the recession clearly missed the collapse of their own companies and the housing market with their own quantitative models. Weather forecasting only works for a few days ahead.

“We have a lot of data,” Fredman said when asked about GIGO concerns.

Because of CCC’s large market share in the collision repair and insurance industries, it’s “among the earliest in the industry” to see the newest models, according to Fredman. It’s been one of the first information providers to flag the impact of new sensors, aluminum, backup cameras, etc. before the tech spread to the mainstream car parc, he said.