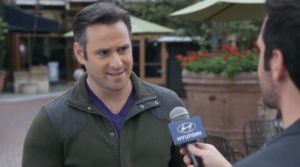 The video “Good to Know – Counterfeit Parts” on YouTube and Hyundai’s Consumer Awareness site points out serious deficiencies in a counterfeit airbag installed in a 2011 Honda Sonata. Posted on YouTube on Sept. 7, it had 925 views as of Friday afternoon.

In the film, a Hyundai interviewer asks “Scott” (actor Jason Adler) to evaluate two airbags, both stamped with the Hyundai logo.

“Aren’t they both airbags?” Scott asks.

“Yes, you’re right. But they’re not the same,” the host replies.

Both men then agree that neither would like to get into a car crash needing an airbag. (The dialogue overall is a bit infomercialish, but not to the wonderful degree of Howie Long learning about the F-150 from Chevy.)

If an airbag deploys that’s not “a Hyundai genuine part that’s been tested to meet safety requirements, you risk injury, or worse,” the interviewer states.

Crash-test footage shows the fake Hyundai Sonata airbag failing, and a narrator warns that customers won’t always get a Hyundai part in a repair.

“I didn’t know that two parts that look so similar could make such a huge difference,” Scott says.

“Did you know that often times, you have the choice to request Hyundai Genuine Parts if you’ve been involved in an accident?” the interviewer asks.

Since the airbag referenced is truly counterfeit — it is fraudulently representing itself as the real deal, including the Hyundai logo — the video is a little confusing. Seen alone on YouTube, the film seems to imply body shops are abetting the criminal copies, putting them on cars willy-nilly unless the vehicle owners think to ask for a non-counterfeit part.

That’s not exactly Hyundai’s point. Besides truly counterfeit parts, Hyundai is criticizing the legal but still controversial practice in collision repair and DIY fixes of imitation aftermarket parts. (And remanufactured and used parts, too, though those were at least from Hyundai when they were new.) .

“Hyundai Motor America’s intention is to let our owners know that counterfeit parts are being used, no matter where they are sourced,” Hyundai parts sales and service senior manager Tiffany Stroupe said in a statement. “It is important that Hyundai vehicle owners know that unless they request Hyundai genuine parts, they may be subject to the parts that the insurance companies have requested or that the body shops source. Owners need to be actively involved in that part of the process.”

The OEM is arguing that based on the illegal counterfeit Sonata airbag that looks identical to a Hyundai part but malfunctions, a legal generic (or salvage) part that fits on a Hyundai might not work well either, and it’s warning customers that insurers and shops might not have their best interests at heart.

“Due to perceived high costs, motorists sometimes choose, or are told by their insurance company, to visit independent repair shops that are not recognized by the automakers for collision repairs,” Hyundai wrote in a news release for media accompanying the video. “Some of these shops offer copies of original parts or recycled components from existing collision-damaged vehicles at a lower cost. Often these parts are unsafe for long-term use and pose a great danger to safety. Counterfeit and recycled crash parts also affect the vehicle’s appearance and decrease its resale value. Hyundai encourages the use of OEM (Original Equipment Manufacturer) parts on all Hyundai vehicle repairs because they are designed and manufactured to meet Hyundai’s engineering specifications. Hyundai does not recommend the use, or re-use, of components removed or recycled from an existing collision-damaged vehicle. Owners need to be aware, it can be hard finding out if their repair facility is using non-original equipment parts or parts that have been damaged due to a prior collision or element exposure.”

OEMs over the past year have campaigned against aftermarket and recycled parts, including Hyundai’s earlier film and one from GM this summer.