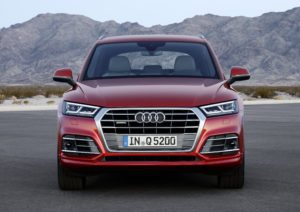 Audi knocked nearly 200 pounds off some versions of its popular Q5 by using higher-strength steels and some aluminum, the company announced Thursday.

The second-generation Q5, which goes on sale internationally at the beginning of 2017, “has grown in nearly all of its dimensions” but managed to come in lighter, according to Audi. Depending on the engine, it can weigh up to 198.4 pounds less than its predecessor thanks to factors like the OEM’s metal picks.

“Steels with maximum tensile strength and aluminum form an intelligent material mix in the body,” Audi wrote in a news release.

The new Q5 didn’t lose nearly as much weight as its colleague the Q7, announced last year to have lost more than 700 pounds. The difference appears to be the Q7’s liberal use of aluminum, particularly on the body panels.

The Q5’s exterior sports an aluminum hood and tailgate; the rest is cold-formed steel. The Q7’s closures and panels, in contrast, are virtually all aluminum. Of course, the Q5 starts at $40,900, while the Q7 starts at nearly $10,000 more.

Ultra-high-strength components can be found in the kind of places you’d expect for energy management and passenger cage protection on the Q5: roof and floor rails and the A- and B-pillars. These include large tailor-rolled blanks reaching strengths of 1,500 megapascals, probably to control deformation and prevent intrusion along the lines of what Honda demonstrated with the 2016 Civic’s steel’s soft zones. “The first Audi Q5 was for many years the world’s best-selling SUV in its class. It was no easy task to design its successor, but that is precisely why it is so very exciting,” Audi Board Chairman Rupert Stadler said in a statement. “With the new Q5 we are setting the bar a notch higher. Among the great innovations are the quattro drive system with ultra technology, highly efficient engines, the air suspension with damper control and a comprehensive line-up of infotainment and assistance systems.”

“Even sportier and more multifaceted: the second generation of the Audi Q5 arrives”

The second-generation Audi Q5, on sale in 2017, lost up to nearly 200 pounds by using higher-strength steel and aluminum. (Provided by Audi)

About 41 percent of the 2017 Audi Q7 is aluminum — up from 6 percent in its first-generation predecessor. (Provided by Audi)