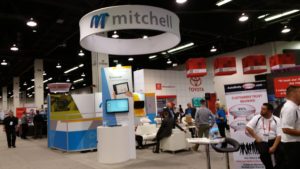 Mitchell announced this week an exclusive deal to bring Tractable’s artificial intelligence to WorkCenter, bringing a form of automated crash damage analysis to another estimating service.

According to Tractable CEO Alex Dalyac, the technology will “change the way that auto claims are managed in the future” and assess collision damage based on photos.

“We have trained computers to see exactly what humans see, so that vehicle damage can be assessed within seconds and consistent decisions made. Artificial intelligence will make the process quicker, more cost effective and more efficient” Dalyac said in a statement this week. “We are excited to partner with Mitchell as we believe their long history and market-leading expertise, combined with their modern cloud-based solutions, will enable us to create unique opportunities that deliver the benefits of artificial intelligence to the Insurance Claims sector.”

The move comes about a month after CCC announced its own DRIVE telematics system, which allow a vehicle to automatically notify an insurer when a crash occurs — and help the carrier determine what happens next. The system raises concerns about “steering” and instantaneous collision damage “desk reviews” but also carries the potential to help shops and customers.

Unlike CCC’s system, which uses physics data from the crash itself — the car’s change in speed and direction, for example — to predict what kind of damage has happened, Tractable’s software uses deep learning to evaluate images of the car.

At the Insurance Technology Congress in 2015, Dalyac said the company had been using about a decade of photos and estimates — a “gold mine for machine learning researchers” — to develop Tractable’s system. He said the most “exciting” but slowest option was obtaining it from shops, as “the body shops can make a quick buck” by selling the data to the company.

Dalyac said the company could assess totaled cars, heavy-damage vehicles (for which insurers and large shop chains have contracted in the U.K. to pay a flat fee) and light damage requiring simply a paintless dent repairer or the like.

“They’re very excited,” Dalyac said then of insurers in the U.S.

He also told the audience his company had achieved a breakthrough to successfully “predict the correct labor operations for damaged parts” at the level of an adjuster with years of experience, beating competitors striving for the same thing.

“Within insurance, Tractable technology is able to assess damage severity to a vehicle just based on photos, optimizing repair and claims management processes,” Tractable’s website states.

Like CCC’s, Mitchell’s system is only as good as its model, and collision repairers have raised concerns with evaluating crash damage based on photos alone.

But unlike photo “desk reviews” which have been found to underestimate damage, Tractable speaks about having its software merely “triage” the repair, dividing it into broad categories of repair — fixable or totaled, for example. (CCC also told us they’re not rolling out anything more specific than a “triage” for now.)

“Automatically audit claims to make sure you always pay the right amount,” Tractable’s website states. “Visually inspect car damage pictures at FNOL to triage between repairable and total loss. Insurance companies are already using our solutions to improve their operations.”

That has potential to avoid wasting everybody’s time and trying to use a rattled customer with zero automotive experience to evaluate if the car’s safe to drive or not. As Tractable describes:

Whenever your policyholder is involved in an accident, it is critical to quickly assess whether the car is repairable or not, and dispatch it to the right workflow the very first time. But current processes rely on dozens of subjective questions and are not accurate enough. Instead of asking your customer to answer questions at a moment of stress, simply ask them to take a few images, or assign this to the tow truck driver. Our AI reviews photos in real time, provides superior triage performance based on damage severity, and allows you to accurately dispatch the claim to salvage, repair or appraisal.

Based on photo estimating’s past lowballing issues and the collision energy management sending damage to the opposite side of the car — not just the point of impact which would traditionally be photographed, the Mitchell-Tractable option seems to carry a greater potential for the “garbage in, garbage out” problem of a model based on incorrect data. On the other hand, if Tractable’s pairing the initial photos and the actual final estimate developed by the shop which did the teardown, it could be much less worrisome and more accurate. It all depends on the data.

There’s always the problem of any “black box” model just outputting whatever money-saving answer the owner — the insurer — wants and a customer without the knowledge to argue differently, or failing to take into account future developments in vehicles.

“Motor claim leakage is difficult to contain, and consists mainly in unnecessary repair operations,” Tractable writes. “Catching these require visual inspection and expertise, but it’s not economical to manually review every single estimate. Our AI can process thousands of estimates per minute, flagging unnecessary operations by inspecting images. Review estimates at scale in real time, and ensure you pay the right amount on each and every claim!”

No repairer should be billing for unnecessary operations or work they didn’t do; that’s just morals (and criminal law) 101. If insurers can catch the bad apples, they’ll hopefully trust the shops which produce legitimate estimates.

Quality shops shouldn’t be too worried about telematics and automation encouraging cheap and incomplete repairs, one expert predicted. Sean Carey of SCG Management Consultants has argued that OEMs will ultimately use both technologies to wrest control of the first notice of loss and claims process from insurers. They simply can’t afford to have their brands ruined by substandard repairs failing to follow OEM repair procedures, he told a Guild 21 conference call last month while attending a Connected Car Insurance conference.

We’ve emailed Mitchell and the United Kingdom-based Tractable for more details on the partnership. Mitchell’s release says more information will be available at Mitchell’s Property and Casualty Conference from Oct. 17-19.

Mitchell described the system simply as “artificial intelligence solutions capable of automating manual tasks” and “enabling customers to make better decisions and accelerating the vehicle repair and claims management processes.” It also said insurance claims experts would be able to delegate “repetitive work” to the AI, “allowing these professionals to focus on more meaningful activities within the claims process.”

Though collision repairers might want to be wary of some automation, there’s also a huge potential for it to improve the collision repair process for shops, customers and insurers. There’s plenty of noncontroversial scut work — data entry, VIN-specific information lookup, the customer’s preferred body shop, checking shop and towing company availability, capability for advanced-materials repair — which could be prepopulated by or delegated to Tractable or somebody else’s A.I.

“Our industry is ready to adopt intelligent solutions leveraging machine learning technologies,” Mitchell Executive Vice President Debbie Day said in a statement. “There are many activities we believe can be improved using these capabilities and we are thrilled to partner with Tractable to bring innovative solutions forward.”