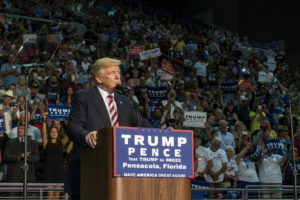 The Wall Street Journal on Wednesday reported that a review of national regulations under the Trump administration would include the CAFE standards responsible for some of the lightweighting seen on modern auto bodies.

“The Trump Administration will complete a comprehensive review of all federal regulations. This includes a review of the fuel economy and emissions standards to make sure they are not harming consumers or American workers,” said John Mashburn, a Trump senior policy adviser, in a statement.

“It is important to remember that this particular program was first put in place as a way to reduce our nation’s dependence on foreign oil, not for purposes of global warming regulation,” Mr. Mashburn added. “Mr. Trump will be focused on bringing jobs, including auto manufacturing, back to the U.S., and making sure that government policies are in the national interest.”

Trump’s campaign website promises to ask “all Department heads to submit a list of every wasteful and unnecessary regulation which kills jobs, and which does not improve public safety, and eliminate them.”

Shops shouldn’t necessarily bank on OEMs reverting back to mild steel in 2017, however, for a few reasons:

Consumers have demonstrated they still like good gas mileage. A June study by Consumers Union, a policy wing of Consumer Reports magazine, found in June that 84 percent of consumers think OEMs should keep improving gas mileage and 70 percent felt the government should keep increasing and enforcing fuel economy. Looking along party lines, 85 percent of the Republican respondents felt automakers should grow gas mileage and 60 percent supported the government continuing a role in fuel economy.

To use an extreme hypothetical: Ford adds the 700 pounds back to the F-150 under President Trump by reverting to the 2014 steel version, which was probably cheaper to produce. Chevy adds more aluminum to the Silverado — as it has been rumored to be planning — and gives it better gas mileage. Would the F-Series still be No. 1 in sales?

OEMs start planning platforms far in advance. It might be too late to stop some of the bodies in the works for cars, trucks and SUVs debuting in the next four years.

Lightweighting gives a better, stiffer, ride and more space, as you can make a larger car with better gas mileage. Honda touted that with the redesign of the 2016 Civic, which has an extensive ultra-high-strength-steel component.

The Insurance Institute for Highway Safety standards aren’t going anywhere, and customers and insurers like cars that keep people alive and uninjured should a crash occur. Besides fuel economy, increasingly tough IIHS safety standards influence auto body design. If OEMs are given a pass on 54.5 mpg by 2025 by Trump, they need to still meet consumer fuel economy demand and the IIHS’ crashworthiness demands.

Global platforms. Fuel economy standards in the rest of the world are converging. Even if the U.S. stops its aggressive fuel economy target, OEMs don’t like building different bodies for different markets. Imports (not headquartered in the U.S.) are projected to make up 57 percent of the U.S. new vehicle sales market by 2021, and they already make up more of the global fleet, an IHS expert said during an Auto Care Association webinar Wednesday.

Hispanics are having a larger influence on new vehicle sales growth, and aside from Detroit Three trucks predominantly bought Asian vehicles. Trump’s platform has stressed jobs, and lightweighting might very well be creating them (though there’s also the possibility government penalties on OEMs would cancel out job gains).

Lisa Katz of the Workforce Intelligence Network for Southeast Michigan — that’s the Detroit area — proposed lightweighting as a job creator for the region in a 2013 Crain’s Detroit Business piece. The Center for Automotive Research observed in 2011 that “the automotive industry values the knowledge and skills of those who work directly with materials.”

“The decrease in automotive jobs related to materials was far less severe than those related to manufactured parts,” it continued, an apparent reference to the recession last decade.

IHS projections for domestic versus import auto sales in the U.S. (Provided by IHS via Auto Care Association)