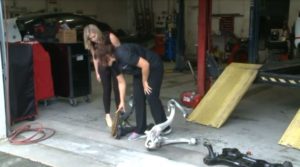 Richmond, Va., news station WTVR was one of the latest to point out insurers allegedy using inadequate auto parts, and comments from the state and an independent insurance agent add an additional layer to the segment worth noting by collision repairers.

Hipolit keys off of what Baugh Auto Body marketing head Ashley Kruger indicated was a recycled suspension part requested by an insurer to fix what she implies is a 2014 or 2015 vehicle.

“That is not the same kind and quality,” Kruger says in WTVR video, comparing the silver original late-model part and a black replacement she implies has been spray-painted. The used part is also connected to what appears to be a rusty wheel hub.

Kruger said insurers request parts of this quality several times during a week, according to WTVR.

The insurer or recycler was not named in the story, and in fairness, it’s possible the insurer never actually saw the part’s condition — merely its availability and price. (Non-OEM on a vehicle on a vehicle just a couple of years old is arguably pretty weak, though.)

Asked about Virginia guidelines demanding only “like kind and quality,” Independent Insurance Agents of Virginia President and CEO Bob Bradshaw Jr. agreed with Hipolit that WTVR’s part would have broken the law “beyond a shadow of a doubt.”

However, the State Corporation Commission told WTVR that Virginia Bureau of Insurance didn’t “see any market conduct issues” involving aftermarket and used parts given what it called a “handful” of complaints.

One wonders what the threshold would be. For example, FCA just recalled a mere 88 2017 Jeep Cherokees built between three days in October for improper welds on an airbag inflator.

The state also cites the auto body industry’s acceptance of the parts as a reason for inaction, according to a statement it provided to WTVR.

“According to the [Virginia] Bureau [of Insurance], the use of aftermarket parts is widely accepted and utilized in the auto body shop industry, not to mention that these parts typically come with lifetime guarantees,” WTVR quotes the SCC.

However, lifetime guarantees still inconvenience customers and stick shops and insurers with lost revenue — a repair bay and staff must work to replace the offending part, reducing cycle time and capacity for new business. Insurers or shops have to cover any labor costs the part supplier doesn’t provide for in its warranty.

The state’s position and the IIAV comments ought to be a wake-up call for shops in Virginia and elsewhere who’ve turned a blind eye to or grudgingly accepted quality issues alleged about non-OEM parts. If you don’t say anything, it’s not going to get any better.

Meanwhile, the customers — and possibly TV anchors — who fail to read their policy or notifications required under Virginia law remain clueless to all of this.

Hipolit ends the segment by mentioning FCA’s “right to request” OEM parts campaign, to which anchor Candace Burns asks, “You can request that?”

You can ask, but you won’t necessarily receive, Hipolit and anchor Bill Fitzgerald clarify to her.

“It’s that ‘like kind’ phrase that really gets a little fuzzy in there,” Fitzgerald says, and Hipolit calls it “vague.”

“Why some body shops will install rusty parts in your car”