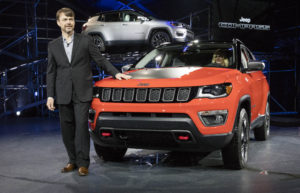 “Compass boasts a rigid foundation,” the OEM wrote Thursday in a news release. “The upper body structure and frame are engineered as a single unit for a stiff and more mass-efficient structure, and it is designed and built with an extensive use of high-strength steel and liberal use of structural adhesives. More than 65 percent high-strength steel is used for maximizing vehicle dynamics and crash performance while optimizing weight efficiency.”

FCA didn’t elaborate further on the unibody body-in-white or joining in its news release Thursday. We’ve reached out to the OEM for more information. Continue to check Repairer Driven News for details.

Adhesives in the factory can easily translate to structural adhesives in the aftermarket — shifting more repairs from welding to alternate joining methods. Besides allowing some materials to be connected without ill effects like joining or loss of structural integrity, adhesives also help OEMs to save more weight than possible with welding.

As for steel, higher strengths generally make it more likely that shops will have to refrain from traditional welding, section in only specific places, and replace rather than repair damaged parts.

The 2017 Compass is probably going to be fairly different from a repair perspective than its predecessor, considering that the Mopar Repair Connection body repair manual for the existing Jeep Compass still contains references to “DaimlerChrysler.”

However, the current-generation Compass, introduced in 2006 and redesigned in 2011, already uses some boron steel, including on the B-pillar, roof rail and A-pillar and involves structural adhesives during repairs, so it won’t be completely alien for shops that’ve been keeping up.

Other elements worth noting by shops:

Shops might also benefit from checking out FCA’s extensive description of all the safety technology possible on the company’s 2017 models, some of which will no doubt appear on the Compass.

“FCA US Breaking Out the Strong Stuff, Gets Lit for 2017”