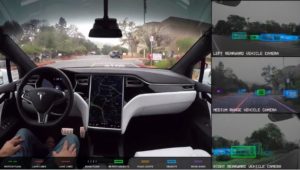 Tesla on Friday released a self-driving car demonstration video to give viewers a sense of how the system perceives the world.

In the slick new footage, an unspecified Tesla model drives itself around the city, stopping and starting for lights, making its own turns, noticing not just other cars but pedestrians and a bicyclist, and parking itself. A “driver” along for the ride “for legal reasons” never touches the wheel — in fact, he gets out at the end, and the driverless vehicle parallel-parks itself.

The video provides views from a medium-range front camera and left and right rearward cameras. The key at the video shows the car distinguishing road signs, road lights, lanes, the road itself, objects in and out of its path, and “motion flow.”

Musk told a Twitter user that the new technology involves Autopilot 2.0, which is a reference to the new technology suite Tesla announced in October. The company boasted then that all new Teslas would have enough gadgetry — including eight cameras — to self-drive once the software and regulation had been worked out.

This is amazing stuff, but what’s important for shops to understand its that cars are already “seeing” the road like this today with some or all of technologies like lane-keeping, autobraking, advanced cruise control, automatic high/low beam-switching headlights, and large animal detection. Tesla’s mapping of “road flow” also sounds kind of like what Volvo announced in terms of Run-Off Road Mitigation distinguishing the side of the road itself.

Remember, the car’s only as smart as its calibration. If repairers aren’t fixing and calibrating these vehicles properly, the car’s perception of the world could be “off” a little bit, kind of like wearing someone else’s glasses. That’s hugely dangerous for both the occupants of your customer’s car but any of these other “green squares” wandering around its field of view.

That’s why glass installers in particular have been announcing calibration measures over the past year — some of these cameras — three, in Tesla’s case going forward — are housed in the rearview mirror and peer through the windshield. I-CAR also has announced a calibration database to help shops manage and keep track of potential OEM demands.

Granted, the human driver maintains liability for the performance of the vehicle during semi-autonomous travel. But if a shop’s sloppy work threw off a system meant, advertised, and effectively mandated to serve as a backstop, the customer or their insurer might want to pursue a claim against the repairer to recover some of the damages.

And once vehicles like Teslas achieve reach higher-level autonomy and are allowed to run without driver supervision — or anyone inside at all — the feds and OEM are probably also going to take a hard look at your work as well.

One other consideration for shops. Tesla’s vehicle and other true self-driving cars are very likely using or will use multiple senses, including radar, sensors, mapping databases, GPS and what is dubbed “vehicle to everything” (V2X) communication — the car “talks” to technology in stop lights, other cars, and even the signal from a pedestrian’s cellphone to detect traffic conditions, obstacles, and its route. All of these will have to be installed and calibrated properly or risk disaster — and like the cameras, some of these can be found standard or as options in vehicle today.

A separate but less detailed video in October also showed off the Enhanced Autopilot’s possibilities. Take a look below.

Featured image: Tesla on Friday released a self-driving car demonstration video to give viewers a sense of how the system perceives the world. (Screenshot from www.tesla.com video)