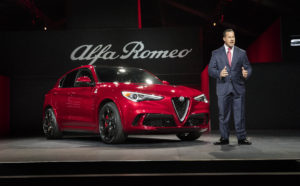 FCA last week unveiled the 2018 Alfa Romeo Stelvio, the second Alfa to use a new FCA platform developed around lightweighting and sports-car driveability.

The Stelvio might not be the sort of thing that’s going to wander into your neighborhood body shop — FCA hasn’t even cracked 1,000 Alfa models sold in America this year — but it’s still noteworthy for collision repairers given the make’s ties to all the FCA cars, trucks and SUVs that will.

The Stelvio uses the “Giorgio” platform first seen on the 2017 Giulia that went on sale earlier this year. (Car & Driver estimates the Giulia — which had sold seven units through October — costs $40,000, with the Quadrifoglio version around $70,000.)

Alfa Romeo CEO Reid Bigland, who revealed the Stelvio at the Los Angeles Auto Show on Nov. 16, told CAR magazine Monday that the Giorgio platform could “trickle-down to other FCA products,” though hopefully not too much that it hurts the brand.

‘The Giorgio platform is class-leading from a driving dynamics perspective, and a significant competitive advantage for Alfa Romeo, so it is going to be difficult to keep that unique to Alfa: that’s the balance we’ve got strike,” he told the British publication. “We need to be true to the premium values we’re looking to establish. But I can see components of that platform going onto other FCA products, upstream or downstream – it could go both ways.”

Automotive News has cited an unnamed source to report in May that the 2018 Dodge Charger will use the Giorgio platform.

“Engineers and designers are working to slim its existing 3,960-pound curb weight down to around 3,500 pounds, the source said,” the newspaper reported.

FCA on Nov. 16 said the Stelvio relies extensively on aluminum (including in the engine) for weight savings. Also some composites.

The seats are carbon-fiber-shell Sparcos that FCA says are meant to be the lightest for the midsize SUV segment. According to the OEM, they allow a soccer mom to both take the family on a long road trip in comfort and perform “extreme cornering” with “maximum lateral support.”

The vehicle also offers less attentive drivers a variety of advanced safety systems, such as autobraking and adaptive cruise control, and has an airbag lineup that includes knee bags for the two front seats.

The Giulia midsize sedan has aluminum in the same locations as the Stelvio and an aluminum/composite rear cross member like its brother, FCA said in March. It also has a “two-piece fascia that neatly integrates the chrome dual exhaust tips for a precise aesthetic” in the back of the car.

Things get even more interesting with the top-of-the-model Giulia Quadrifoglio, according to an FCA release a year ago.

“Born From the World’s Greatest Driving Road – Stelvio Pass – the All-new 2018 Alfa Romeo Stelvio Sets a New Benchmark in Performance, Style and Technology in an SUV That Could Only Be Italian”

“Created With the ‘Mechanics of Emotion,’ the All-new 2017 Alfa Romeo Giulia Quadrifoglio Delivers Italian Style With Benchmark-level Performance and Precision to the Premium Mid-size Sedan Segment”