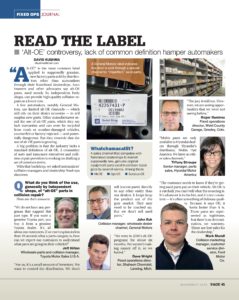 A couple of interesting items on the issue of “Opt-OE” collision parts — and what they actually are — have surfaced recently.

The collision repair industry and auto insurers aren’t alone in wondering what to make of parts listed as such on procurement and estimating services. Automotive News’ sister magazine Fixed Ops Journal, which caters to the dealership service-center world, took a look late last month.

And the Hartford confirmed last week it’ll allow direct repair program auto body shops to source them from non-dealership sources, equating the parts to recycled ones. We asked the carrier about their stance after a repairer sent us a copy of the carrier’s parts policy explaining what elements of a policyholder’s vehicle don’t have to receive new parts from the automaker and equating Opt-OE parts with recycled ones.

Hartford is by no means alone among carriers allowing such a “black box” parts category to be used for customers. The components, whose terminology suggests they’re from a formal automaker program, seem in reality to be whatever a vendor would like to label as such on an estimating service or parts procurement system and what an insurer and repairer will accept for an estimate. With a few exceptions, several major automakers have confirmed they don’t sell any alternative or surplus collision parts.

We took a deep dive into the issue of “Opt-OE” parts, also known as “Alt-OE” or “surplus OE” in 2015, but the question of what exactly is being labeled as such seems to have captured wider attention this year.

The Collision Industry Conference spent time in April and August discussing such “grey market” parts and the California Bureau of Automotive Repair instructed collision repairers at NACE to clarify to customers what’s actually being put on their car. And now, Fixed Ops Journal has gotten into the game, raising similar questions and featuring quotes from OEMs and dealerships.

“The customer needs to know if they’re getting used parts put on their vehicle,” Ford collision marketing service manager Mark Mandl told Fixed Ops Journal in the article posted Nov. 21. “Alt-OE is a catchall; you can’t tell what the sourcing is. It’s whatever is in the bin, and it’s not consistent — it’s often something of dubious quality. Because it says OE, it looks better than it is. These parts are represented as legitimate, but there’s no determination, no warranty. These are lost sales for the dealership.”

Ford as of our 2015 series had an OE Reman program, but it’s labeled as such — even down to different parts numbers.

Asked to clarify the terms of what the Hartford refers to as “Optional OEM or (OOEM),” described as “Parts made by the original manufacturer but not sold as new due to blemish or overstock,” company spokesman Thomas Hambrick on Friday wrote that Hartford allowed shops to source them from dealerships — but also anyone else.

“For recycled cosmetic parts, The Hartford allows the use of optional-OE (overstock) and alternate-OE (blemished) parts on a case-by-case basis, and will work with repair shops to remediate blemishes,” he wrote in an email Friday. “Our direct repair partners or independent appraisers can select parts from either OEM dealer or non-dealer channels.”

This raises the question of what such vendors actually sell you, of course. We recounted the story of one shop which received an Opt-OE BMW light — only to have it fry the electronics because the lamp was actually a European version. Or it’s a well-done counterfeit, a nice-looking recycled part — or even a new part, discounted to make a sale.

Recycled parts can be used on various elements of a customer’s car, according to the Hartford guidelines we received. (Note: The document describes the insurer’s parts policy of “same year or newer”; the carrier recently changed its stance to “same series.”) Other insurer and repairer representatives at an August Collision Industry Conference both suggested a need for greater clarity on what to call such parts — and a need for IPs and auto dealerships to be at a future CIC table.

State Farm’s Chris Evans said the last time his CIC Definitions Committee really looked at parts definitions, it was 2012, and the concept of Opt-OE wasn’t really on anyone’s radar.

“I do think it’s very worthy” to define sourcing and what such parts are, he said. “That’s for the … committee to wrestle with.”

As repairers and insurers, there’s a “mystery around that,” he said.

Representatives from FCA and Toyota confirmed again they don’t have Opt-OE collision parts at all. “We try and police it,” FCA’s Bryan Wayne said. Allstate’s Clint Marlow reminded everyone to think of the vehicle owner — does “Opt-OE” resonate with them? “I think ‘OE surplus’ is easier to understand.”

If a part was repaired, call it remanufactured, Marlow suggested. If it’s a copy — even by an OEM supplier — it’s aftermarket, he said.

But if it’s an OEM part was brought by a drone instead of a dealership, why not call it OEM? he wondered. It might be “putting our head in the sand a little bit” to ignore OEM parts sold by someone other than a dealership, he said.

If “we can’t explain” the category, how could the industry expect the vehicle owner, Jeff Hilton of Toyota asked. “The simpler the definition the better,” he said.

One potential suggestion: “Other,” though this might not fly with an agency like the BAR, a California consultant pointed out.

“Other is a good, general bucket,” the Society of Collision Repair Specialists’ Aaron Schulenburg said. Calling something Opt-OE was disingenuous, he argued.

Another means of controlling the issue might be for insurers to let price-matched OEM parts not ding a DRP collision repairer on a key performance indicator, comments from Jeanne Silver of CARSTAR Mundelin suggested. Too many OEM parts can get some repairers in trouble with their insurer partners tracking a parts-category KPI as a cost-control measure — even if the parts are discounted to compete with aftermarket copies — she indicated.

“They’re willing to be competitive,” Silver said of dealerships.

It sounds like that would seem to create an incentive for dealerships to sell a truly new OEM part as “Opt-OE” to help repairers check an insurer’s box under the current KPI scenario. Perhaps insurers might consider looking at total cost saved by a DRP shop rather than arbitrarily dictate how DRP repairers achieve that saving.

For example, why not let a shop which uses all OEM parts make up the cost difference through a combination of methods, such as quicker cycle times due to fewer part returns, the OEM price-matching suggested by Silver and picking up part of the car rental tab?