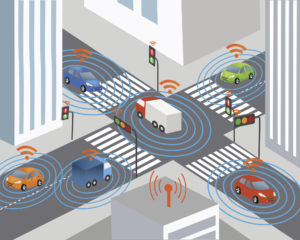 The Department of Transportation on Tuesday proposed mandating vehicle-to-vehicle communication on all new cars — a technology which lets cars avoid crashes by “talking” to each other.

This technology, particularly if combined with V2I — vehicle-to-infrastructure (the car “talks” to traffic lights and other fixtures) — could dramatically reduce collision frequency as well as accelerate the development of self-driving cars that eliminate poor human drivers from the equation altogether. About 94 percent of collisions are attributed to human error, so computers don’t really have that high of a bar to meet before they start cutting into your auto collision business.

“NHTSA estimates that safety applications enabled by V2V and V2I could eliminate or mitigate the severity of up to 80 percent of non-impaired crashes, including crashes at intersections or while changing lanes,” the National Highway Traffic Safety Administration wrote in a news release Tuesday.

V2I “guidance” will indeed follow “soon,” the NHTSA promises, and we’d bet it comes before the new administration. Transportation Secretary Anthony Foxx and NHTSA Administrator Mark Rosekind have both aggressively championed the potential for technology to save lives on the road, and they’ve been discussing and embracing these kinds of concepts all year.

“We are carrying the ball as far as we can to realize the potential of transportation technology to save lives,” Foxx said in a statement.  “This long promised V2V rule is the next step in that progression.  Once deployed, V2V will provide 360-degree situational awareness on the road and will help us enhance vehicle safety.”

The core idea is pretty simple. If the driver of Car A is about to change lanes right into Car B, and that driver’s collision prevention technology is disabled or can’t “see” Car B, Car B just tells Car A: “Hey, watch it.” Car A adjusts course and nobody crashes. (V2v) Or a car about to run a red light or miss a stop sign because of driver error is is told by the sign to stop, and it does (V2I). Or a bunch of cars gridlocked by a crash tell everyone else in the area to avoid that street. We’ve also heard of a concept where cars can sense the existence of cellphones coming into their lane — and know to stop because logicially, that must mean a pedestrian with a phone is walking into their path.

You can even see clever engineers designing second-derivative features into the technology, such as a yellow light telling a car “I’m going to turn red in 5 seconds” and all the cars adjusting speed independently to run the light or coast to the intersection for a stop perfectly timed with the red. Or a car telling another car about to make a right-on-red that, “Hey, I’m going 40 mph. Basic physics say you won’t be able to pull out before I rear-end you. Don’t make the turn yet.”

“V2V communications can provide the vehicle and driver with enhanced abilities to address additional crash situations, including those, for example, in which a driver needs to decide if it is safe to pass on a two-lane road (potential head-on collision), make a left turn across the path of oncoming traffic, or determine if a vehicle approaching an intersection appears to be on a collision course,” the NHTSA wrote. “In those situations, V2V communications can detect developing threat situations hundreds of yards away, and often in situations in which the driver and on-board sensors alone cannot detect the threat.”

The NTHSA described vehicles pinging each other up to 10 times a second with short-range communications about speed, direction and location. Obviously, cars with features like autobraking (standard by 2022) and adaptive cruise control will be able to provide better safety from their ability to react. But even a car with V2V standard and an owner too cheap to spring for some more advanced driver’s assistance systems features could recognize some safety benefits by virtue of warnings delivered to the driver and “smarter” cars refusing to crash into it.

The average age of a vehicle in a collision was 7.02 years in the third quarter of 2016, according to Mitchell data published Tuesday in the company’s latest Industry Trends Report. (That’s about a half-year drop from the same time in 2014 and 2015.) So figure that if the NHTSA regulation is enacted, your shop is going to see a lot of its business vanish seven years later — if not sooner.

The NTHSA is taking public comment for 90 days and proposes an “aggressive” five-year phase-in for the technology if and when the rule is finalized, as any network is only as good as the number of nodes in it. (Essentially, the idea doesn’t work if only a few vehicles have it; they’d have nobody to talk to.)

So say Transportation Secretary Elaine Chao is confirmed and doesn’t overturn the rule, and the NTHSA publishes sometime in 2017. By 2020, OEMs need to pump out 50 percent V2V-equpped vehicles. By 2022 — conveniently when all OEMs need autobraking standard, every new car has V2V. Crashes should start trickling off after that, if not sooner. Based on Mitchell’s data and the NHTSA’s scenario, 80 percent of crashes are gone by 2029, assuming V2I rolls out as aggressively — and given how lousy some city low-tech infrastructure is, that part could be a stretch. But you get the idea.

The NHTSA actually suspects some OEMs might start producing V2V technology sooner, as it’s a feature their competitors wouldn’t have.

“These OEMs will be able to capitalize on arriving to market earlier than their competitors, and the customers of these OEMs will realize safety, mobility, and environmental benefits earlier than others. As such, the agency does not envision granting credits for early compliance with this schedule as there are sufficient incentives already in place for OEMs to consider early compliance.”

An OEM trade group praised the regulation proposal on Tuesday, and the NHTSA describes automakers as supportive of having this one coordinated by the feds rather than rolled out piecemeal by individual OEMs.

“Today’s release of the V2V NPRM is a critical step to enabling connected car technologies that promise to improve highway safety and deliver significant lifesaving benefits,” Association of Global Automakers President and CEO John Bozzella said in a statement.

On the plus side for shops, severity will probably grow a little — the per-vehicle cost of the equipment itself was estimated at between $124 to $298, for example. (Of course, that assumes it’s damaged in a collision.)

Also, V2V could help repairers by providing a means of preventing crashes caused by their own mistakes — avoiding not only the emotional horror of a customer’s injury or death but lawsuits as well.

For example, a vehicle with ADAS sensors or cameras miscalibrated or inoperable following a repair might still avoid a crash by virtue of other cars warning it away with V2V. (This doesn’t give you a license to intentionally screw up or neglect a repair to cut costs or cycle time, of course.)

Be heard: Public comment can shortly be left on www.regulations.gov for docket NHTSA-2016-0126.

Featured image: The Department of Transportation on Tuesday proposed mandating vehicle-to-vehicle communication on all new cars — a technology which lets cars avoid crashes by “talking” to each other. This technology, particularly if combined with V2I — vehicle-to-infrastructure (the car “talks” to traffic lights and other fixtures) — could dramatically reduce collision frequency as well as accelerate the development of self-driving cars that eliminate poor human drivers from the equation altogether. (monicaodo/iStock)