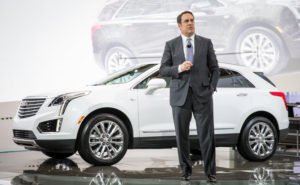 Numerous automotive critics have recently been publishing their takes on the 2017 Cadillac XT5, and collision repairers might want to take the opportunity to examine the CUV as well.

Replacing Cadillac’s No. 1 model the SRX and already selling 32,049 this year, the XT5 is perhaps the most likely Cadillac to appear in one’s shop.

The XT5 weighs 278 pounds less than the SRX, largely due to extensive use of higher-strength steels. It’s also 100 pounds lighter (but seven inches longer) than the Audi Q5, and a whopping 650 pounds lighter than the Mercedes GLE Class, “with no compromise to body rigidity and crash performance,” Cadillac wrote in February.

“Passenger safety was one of our top priorities when we engineered the XT5,” XT5 chief engineer Paul Spadafora said in a statement. “We equipped the XT5 with Cadillac’s full set of driver awareness and driver assistance systems to aid collision avoidance. Just as importantly, we designed an advanced structure that is both stiffer and lighter, for excellent crashworthiness. This included a revised front structure that specifically targets the challenging offset barrier scenario.”

Cadillac used physical testing and computer simulations to create a clever approach to passing the tricky IIHS small-offset crash test, in which the driver’s-side front corner of the car crashes into a narrow object (mimicking the edge of another car or a telephone pole) at 40 mph.

The trick lies in the design of the front rails, according to Cadillac. Engineers “‘splayed’ the front rails on each side, widening and angling the structure slightly outward,” the OEM wrote.

“This design alteration targeted offset barrier impacts and contact to the front corners of the vehicle, a vital aspect in safety testing and real-world collisions,” it continued. Cadillac said it applied many of the tricks from the CTS and ATS, which it called “the lightest cars in their respective segments” when designing the XT5.

“This includes the use of laser welding, ultra high-strength steel and advanced analytics that ensure a stronger structure, and excellent crash performance with less overall bulk,” Cadillac wrote.

“The new XT5 takes the lessons learned from Cadillac’s highly acclaimed lightweight and agile luxury cars and adjusts the formula for the unique desires of the crossover vehicle customer,” Cadillac executive chief engineer David Leone said in a statement. “Reducing mass and bulk not only improves driving dynamics, it enables us to improve interior space and fuel efficiency.” Press-hardened ultra-high-strength steel can be found in the toepans, roof rails, and A-pillars, according to a March Cadillac presentation. What GM only describes as “Multiphase Steel with high ultimate strength” is also found in abundance on the body-in-white.

The weaker of the two GM dual-phase steels (up to 800 megapascals) is still subject to certain restrictions on collision repair, and the stronger of the two, which starts at 800 MPa, requires even stricter conditions — for example, no stitch welding — be followed.

Some of the differences can be seen in GM’s handy steel matrix, which describes instructions for steels on its vehicles as of 2010. Page 1 of the document can be seen below. Knowing which is steel which through GM’s specific repair instructions for the XT5 and following these and all other repair procedures will be crucial to maintain the kind of crashworthiness Cadillac’s engineers have achieved.

The lightweight structure of the XT5 is stiffer and stronger than the SRX due to the use of improved materials and advanced design methods. A diagonal “A-frame” front chassis brace in the underbody was added to provide a more solid driver feel and stiffness for the vehicle in turns.

Other features/options possibly of interest to collision repairers:

Different steels in the body-in-white of the 2017 Cadillac XT5. (Provided by Cadillac/Copyright General Motors)

A simulation of the Cadillac XT5 in a small-overlap crash test. (Provided by Cadillac/Copyright General Motors)