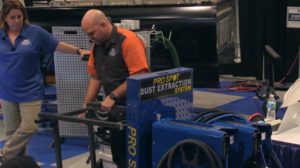 If you didn’t hit SEMA this year, or if you spent all your time ogling custom cars and forgot you were there to buy shop stuff, fear not. I-CAR and Collision Hub have you covered with their annual video of “Cool Tools.”

It always makes for a great little shopping list for technicians and shop owners alike. The gadgets and equipment range from a small accessory that mods another small accessory — a belt clip for 2015’s highlighted “Tape Thing” — to bigger-ticket items like the 3M Automotive Total Sanding Solution.

This year’s video also points out just how different collision repair is from even a few years ago with discussion of some technological trends like new powertrains affecting vehicle transport around a shop, calibration, aluminum dust extraction and structural adhesive.

Below, find highlights from Collision Hub CEO Kristen Felder and I-CAR director of industry technical relations Jason Bartanen’s presentation at SEMA. But save a little money for some of the other “Kool Tools” presented next month by Kye Yeung and Toby Chess at the Society of Collision Repair Specialists open board meeting.

Felder plugged the DJS Fabrications wheel dolly, pointing out that given considerations like hybrid electronics, “I just can’t push a car around the shop any more like I used to,” nor could she necessarily cycle keys with items disconnected on a car without triggering diagnostic trouble codes.

Enter the dollies, which also can be attached to approved mounts for European cars.

“I can’t live without mine,” she said.

Transporting an unwieldy part also can be a hassle, and Bartanen suggested the ProLine Lift King for removing truck beds. With the simple, ratchet-off-the-bed design, a technician could avoid having to call over his or her colleagues to form a manual bed-lifting posse.

“Wouldn’t that be amazing?” Felder said. “To keep production going, one guy can do it all?”

The technology has another slick feature. It can plug into the OBD-II port and save all of the vehicle’s presets prior to disconnecting the battery. When it’s time to reconnect the battery, the settings can be restored as well.

That’s a useful way to impress customers whom OEMs have spoiled with customization far beyond the days of the five mechanical AM radio preset buttons. She also plugged Whistler’s clever FlexiGlo, a floppy, magnetic rectangle sporting a grid of adjustable-brightness LEDs. Because of its bendy and magnetic nature, it can be attached all over a car to illuminate various nooks and crannies and carried around in a back pocket.

Another lighting tool could prevent a technician from being injured and a body shop owner from running afoul of the feds or a civil lawsuit.

Some shops adopt welding curtains to partition welders from other technicians who aren’t equipped with the appropriate eye protection (i.e. welding masks). But “we don’t have a lot of welding curtains out there,” she said, partly because they deprive techs of some of the light they need.

Even when there’s ambient light, it might not be enough, as Felder observed that some minor injuries like jammed thumbs and the like occurred while she was “kind of working in the dark underneath the car.”

Car-O-Liner now sells Brilliant Solutions, a line of aluminum, welding and other curtains containing LEDs which project bright side lighting.

“Be thinking about how you’re protecting the technicians in your shop,” Felder said. The technician working next to the welder needs to be protected as well under OSHA regulations, she said. Car-O-Liner’s option allows that to happen without sacrificing the second technician’s lighting.

Bartanaen for his part recommended the Neutralizer AC (though he noted they’re not the only manufacturer making one). The gunlike device eliminates static electricity from those plastic components, which he said can be extremely useful to the paint department while refinishing bumper covers.

Another bonus: It prevents the static electricity from throwing off the metal orientation of metallic paints, making it easier to color-match the bumper cover to other parts of the vehicle, according to Bartanen.

Not all of the “Cool Tools” were brand-new products for SEMA 2016. Bartanen and Felder highlighted three previous “Cool Tools” that received “Cool” add-ons or variants for 2016.

The Collision Edge Dent Viewer provides technicians and insurers a grid which can be projected over a dent in a flash photograph — thereby avoiding time-wasting requests for new photos to prove a divot will indeed take X many hours. Responding to industry demand, the company in 2016 unveiled the Dent Viewer XL, a free-standing board for bigger vehicles and bigger dents.

Collision Edge also improved upon its magnetic Tape Thing dispenser by creating a new Tape Caddy, which lets a technician or painter wear the Thing on their hip. “You’ll never lose another roll of tape,” Felder said.

The device also sports Velcro and magnetic strips to carry an item like a razor blade on the hip as well.

Finally, Bartanen said Pro Spot’s PR-5 has received an adapter that grants it the ability to install blind rivets. That’s handy on a vehicle like the F-150, which Bartanen said can’t receive self-piercing rivets in replacement panels — only aluminum MIG plug welds or blind rivets.

Felder said it was an example of a 2016 trend of manufacturers “looking for ways to let one tool be able to work with you in your shop.”

That’s helpful for shop owners, which can save on overhead like buying multiple versions of what seems like the same product — as well as insurers and customers who won’t see such larger capital expenses recouped in prices.

Protecting staff — who “can’t sand with just a dust mask anymore,” vehicles and paint jobs from sanding dust is growing increasingly important, according to Felder, and she and Bartanen suggested two mechanisms for doing so.

“Contaminant control is becoming a big deal in the body shop,” Felder said. “We’ve got to get that under control.”

She presented the 3M Total Automotive Sanding System, which she said was now available across the country. Features included vacuum sanding.

Bartanen showed off the Pro Spot Dust-Free Sanding System, which was “fully pneumatically operated” — allowing it to be moved to areas without worrying about cords and electricity access — and “unbelievably light.” Its steel extraction system has nonconductive lines, but the aluminum extraction system is conductive — grounding aluminum dust to avoid combustion.

Scanning was a “hot topic” this year, but Bartanen cautioned the audience that “we really need to start talking” about post-repair calibration.

Many of the advanced driver’s assistance systems — designed to inform drivers of collision threats and in some cases, take action if the driver doesn’t — “require recalibration under a lot of different conditions,” Bartanen said.

I-CAR researched countless OEM procedures to provide repairers with the information of all possible calibration demands of a particular vehicle; where all the sensors, cameras and other gizmos requiring calibration might be located; and what the OEM calls its ADAS and other calibration-demanding tech. This and more are available to repairers, insurers and anyone else with a subscription to the I-CAR Repairability Technical Support portal. (I-CAR students or Gold Class/Platinum facilities/staff get free access.) He vowed that by the end of the year, I-CAR would have 100 percent coverage of the 2016 model year.

Armed with that information — the repairer still needs to check with the OEM what combination of those features came standard or were bought as options on each unique vehicle before them — estimators and technicians should have a much better sense of what work will be necessary.

A shop will be more likely to meet a delivery date and not have to send the car back to the dealership at the last-minute because of an overlooked and uncalibrated system, Bartanen said.

But besides blowing cycle times, such ignorance or omissions could have far more serious consequences.

Felder pointed out that 20 years ago, “five skills” could have fixed virtually any car that came into an auto body shop.

“Those skills just aren’t true anymore” she said. “… We’re really working on rolling computers.” When an OEM issues a position statement saying a car should be recalibrated, “there’s a reason they’re doing that,” she said.

A shop in California didn’t calibrate the lane-departure warning, she said. During a test drive by the shop owner, the car thought that a merge onto the freeway was the driver travelling off the road.

“It goes to correct him,” she said. “It’s doing what it’s supposed to do.”

She asked the audience to consider what an actual customer might have done: Panicked and overcorrected? Crossed lanes of traffic? “What could have happened?” she asked.

Repairers have simply got to stay up-to-date on vehicle systems and demands, she said, calling education “the best tool you can have.”

This screenshot from the I-CAR Repairability Technical Support portal shows the 2016 Ford F-150 on the new calibration database announced Nov. 1, 2016, by I-CAR. (Screenshot from rts.i-car.com)