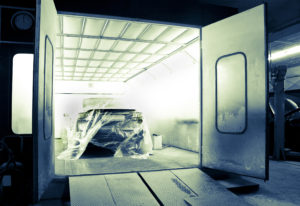 “No paint job will ever be better than the prep job,” GFS auto refinish technical adviser Jason Garfoot said. Bad preparation will cause “rework issues” or eventually flaking or peeling, he said.

“When you have to repaint that stuff … you’re doing that stuff for free,” Garfoot said. That not only keeps a flat-rate painter from moving on to the next profitable job, but it ties up a painter and booth, setting back a shop’s production, he said.

Some flat-rate painters will even pay their own prepper, for “a good prepper is worth a lot of money to them,” Garfoot said.

Adequate preparation includes a careful mix of masking, degreasing, and removing dust and other contaminants, according to Garfoot.

Other considerations include following the paint manufacturer’s rules on sanding — too fine or “especially” too coarse a grit “will also show up in the final paint job” — and the potential for the part’s temperature to affect the refinishing, he said.

For example, parts stored outside in Wisconsin during the winter won’t warm up completely to the ambient temperature if immediately brought into the booth and refinished, Garfoot observed. Sealer sprayed on such a part won’t dry completely through to the panel, and can sometimes lead to “edge mapping” a week or two later when the rest of the sealer dries, shrinks and reveals the repaired area.

Much of Garfoot’s advice centered on ensuring all dust and contaminants were truly removed — and not just once.

Many cleaning products “work fantastic” as long as you follow a basic procedure: Blow all the contaminants off the sanded part, use a degreaser — and then blow off the substrate again.

“That’s a step I see skipped a lot, and it definitely leads to issues,” Garfoot said. Often, painters just spray the degreaser on the part, wipe it down, and fire up the paint gun without that second air blast, he said.

Contaminants can then still remain; in fact, the job of products like degreasers is to bring embedded contaminants to the surface for removal, he said. Paint sprayed over those particles or residue from the cleaning product can lead to fish eyes or areas of paint ultimately losing adhesion and ultimately delaminating, according to Garfoot.

After the second blowoff, painters still need to use a tack cloth on the part – and on the air hose to be connected to the gun.

“I see that step skipped a lot,” Garfoot said, and failure to do so can lead to particles from the hose falling onto the car.

Similar care should be applied within the booth. Don’t sand inside of it, Garfoot said.

“Sometimes this can be a little bit unavoidable,” he acknowledged. But if you’re going to do so, make sure the vehicle is carefully blown and tacked off — and then change your gloves, Garfoot said. A new pair of gloves costs pennies — far less than a half hour of rework. (For more on how one’s clothing can affect paint, see here.)

GFS trainer: Cover up to save money in paint shop, painting career from isocyanate allergy

If you’ve got to do more extensive sanding, bring the car outside of the booth to do so. “It’s worth remasking the back half of that car” to ensure the booth stays dirt-free, he said.

A painter could take all of these precise steps to ensure cleanliness — and then still screw up the paint job or booth from an external or internal contaminant.

Sometimes in multipainter shops with multiple preppers, a prepper will bring a vehicle into the paint booth and open the door while another technician is still sanding something in front of it. The dust from the second employee can work its way into the booth, and while typically this doesn’t affect the paint job, it will clog the booth filters faster, according to Garfoot.

A booth typically runs at slightly positive air pressure, which prevents dirt from entering the booth through cracks or other small holes, according to Garfoot. He said this should be further leveraged by leaving the booth running and the air pressure positive when you bring a vehicle in or out.

“It seems odd to (painters) to turn a booth on that’s empty and then open the doors wide open,” he said. But positive air pressure means that air from inside the booth is being forced out, rather than letting external air — and the dust it contains — be sucked into the booth.

Limiting supplies in the booth also can help prevent contaminating that beautiful surface you just prepped or painted. Often, a painter will have a lot of gear inside of a booth, like a stack of tag rags and tape rolls — and it’s all getting hit with overspray, Garfoot  said.

Grab one of these oversprayed tack rag to wipe down a car before clear-coating, and a painter sets himself or herself up for a “lot of problems that are not easy to fix,” Garfoot said. One potential ugly scenario: a white car with a big black speck in the middle of the hood.

“The small little things can make a huge difference,” he said.

Other options include using turntables or magnetic boxes to keep products used inside the booth free from overspray.

While not necessarily a problem in collision repair facilities, rubberneckers who want to see the progress in a custom shop can also make life difficult for painters, Garfoot said.

“Those people aren’t wearing paint suits,” he said, nor have they blown themselves off. Coming in to sneak a peek at a cool hot rod’s paint job is potentially ruining that paint job with the contaminants brought in on their bodies and clothing.

“They can look at it when it’s done,” Garfoot said.

Besides the issue of rework and gunking up booth filters, “a nice, clean vehicle” from the paint department helps cut down on buffing and detailing time, which can subsequently get the vehicle back to the customer more quickly.

“Ten extra minutes spent cleaning a vehicle in the booth can save you hours in the end,” Garfoot said.