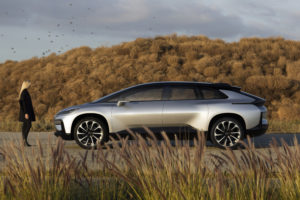 Faraday Future on Tuesday unveiled its FF 91, the first production model of what the startup OEM calls an “entirely new species” of autonomous electric car.

The OEM offered few details about the vehicle body during its pre-Consumer Electronics Show launch event aside from its use of a “monocoque vehicle structure in which the chassis and body are a single form – providing measurable improvements in overall vehicle rigidity, safety and handling.”

This structure is part of Faraday Future’s Variable Platform Architecture, a supermodular format allowing the OEM to pack in different combinations of battery cells and other features. As Wired described it following the OEM’s 2016 CES appearance:

Most automakers have been doing this (modular design) for decades. Ford or Honda can use the same platform to underpin different bodies, from sedans to crossovers, the world over, which makes producing and selling those cars more cheaply and in different markets possible. But Faraday takes the concept further. It says it will use one platform for everything from, say, a two-seat commuter car to a three-row crossover. It can just adjust the side rails to add more “strings” of batteries, as it calls the rows of power cells under the floor of the car.

That could make for relatively consistent and convenient repair procedures — so long as shops don’t lose track of what Faraday Future segment they’re reassembling.

The FF 91 body itself might be made of aluminum, useful for achieving what Faraday Future propulsion engineering Vice President Peter Savagian described as a maximum distance of 378 miles that lets drivers “forget range anxiety.”

“Sources within FF’s supply chain told Electrek that the startup took delivery of several aluminum body-in-white for the same vehicle as the prototype seen in the sightings,” Electrek wrote in September.

Other notable features potentially affecting repair procedures and severity include:

And, while not collision repair-specific unless the car crashes into something while accelerating, we should note the OEM’s boast that the car can get from 0 to 60 mph in 2.39 seconds, provide 1,050 horsepower, and pull more than 1 G.

For $5,000, customers can reserve a FF 91, scheduled for sale in 2018. However, we should also point out some skepticism among the auto press that the company can deliver all that it claims, not to mention Nevada’s treasurer calling the company a “Ponzi scheme,” according to a Reuters report published in Automotive News.

“Faraday Future is building a fleet of prototypes, more vehicles spotted testing in the wild”

“A NEW SPECIES IS BORN WITH THE LAUNCH OF FF 91”