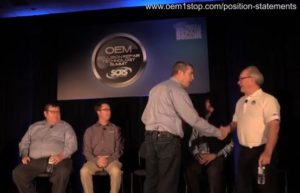 Repairers trying to educate their colleagues/employees, insurers or customers on the need for vehicle scanning can point the other party to a new SCRS video allowing viewers to learn about scans directly from the OEMs.

The film posted Friday by the Society of Collision Repair Specialists features the first panel of the 2016 OEM Collision Repair Technology Summit at SEMA, made up of collision repair experts from FCA, Honda, Nissan and Toyota (led by moderator John Ellis of Ellis & Associates)

These four OEMs woke everyone up to the need to scan vehicles by issuing position statements in summer 2016. (General Motors and Mercedes also followed suit in 2016 as well.) But it’s important to remember that OEM requirements existed for years prior to that — a fact you’ll hear discussed on the video. Other topics include how few diagnostic trouble codes activate dashboard lights and aftermarket scan tools.

Some of the OEMs also point out the absurdity of some of the blowback against the procedures, which mechanics have been doing for a long time.

Toyota’s Eric Mendoza at one point (around 45:09) describes being baffled by someone trying to countermand what the OEM — the engineers who built the vehicles and develop repair procedures — says to do.

Toyota has told repairers exactly how to do a proper repair. “What else can I do?” Mendoza says.

Nissan’s Justin Miller makes a similar point (around 12:40) early in the presentation about Nissan’s mandate to post-repair scan every vehicle.

“Some of the insurance partners had mentioned … By saying ‘all,’ we weren’t kind of being clear enough,” said Miller, who has an insurance background as well.

“I thought it was pretty clear,” he continued, drawing laughter. He said he clarified it further in an Infiniti position statement to explain that “anything that can be plugged in with the console and read” — essentially, everything with the OBD-II port —  should be scanned.

“That would apply to Nissan as well,” he said.

The video also contains a handy link repairers can use to access automakers’ OEM1Stop position statements page. However, this isn’t always updated immediately — the Mercedes policy, for example, still isn’t on there, nor do all OEMs with scanning requirements necessarily write position statements. Shops with questions about scanning should check OEM’s mechanical and collision repair procedures and/or look for position statements by accessing the manufacturers’ repairer-facing websites themselves — conveniently accessible through the homepage of OEM1Stop.

“Restoring Vehicle Functionality With Scanning and Diagnostics Part 1 of 2”