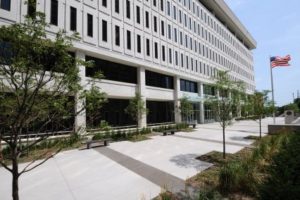 The state of Minnesota’s attempt to crack down on Safelite for allegedly misleading policyholders on behalf of AAA failed Monday as a federal court struck down a 2015 consent order on free-speech grounds.

Safelite’s apparently scripted reminders to customers that they “may” be balance-billed by using a non-DRP glass company — even in instances where the shop is on the line saying it won’t happen — were deemed protected speech under the First Amendment on Monday.

Minnesota District Judge Susan Nelson struck down a 2015 consent order worked out between AAA and the Minnesota Department of Commerce in which the insurer was directed to quit using Safelite — allegedly an unlicensed adjuster — to administer glass claims.

“At most, “may be balance billed” statements are potentially misleading,” Nelson wrote. “When commercial speech is only potentially misleading, ‘the remedy in the first instance is not necessarily a prohibition but preferably a requirement of disclaimers or explanation.’… The DOC did not impose a disclaimer requirement in the Consent Order, but rather prohibited Safelite, AAA, and any other claims administrator working for AAA, from employing such statements.”

However, Nelson did uphold the state’s ability to force an insurer or claims administrator to tell customers of their right to pick a shop — a small win for collision repairers and the state’s insurance agency.

Given the federal jurisdiction and constitutional issues here, Nelson’s decision potentially carries regional, if not nationwide, ramifications for shops, insurers, claims administrators and regulators — not to mention customers.

Safelite is checking with its counsel on if it can comment, and we left a message for the Minnesota insurance agency. Continue to check Repairer Driven News for updates.

AAA actually had proposed the idea of dropping Safelite to avoid a larger penalty than the $150,000 in the consent order, according to the state. Minnesota also has observed that the AAA-Safelite contract included a provision that Safelite could be terminated at any time.

The commerce department, which regulates insurance, felt that Safelite was trying to steer on AAA’s behalf.

Safelite argued that even if the state’s right about everything — and it questioned how much research Minnesota really did (as did Nelson) — it’s all irrelevant. Shops still have the right to balance-bill a customer, and even if they say they won’t, Safelite’s not obligated to believe them, it said.

Nelson agreed: Had the state and AAA barred statements that an out-of-network shop will balance-bill a customer, that might be out of line — but it didn’t do that, she wrote. Telling Safelite to stop saying something that was by definition true was unconstitutional.

“Equally important here is what the Consent Order does not address. It does not purport to act on Safelite’s occasional assertions that insureds ‘would’ or ‘will’ be balance billed—rather, it specifically addresses Safelite’s suggestions that insureds ‘may’ be balance billed,” Nelson wrote. “Nowhere does the Consent Order contend that Safelite’s statements in the claims administration process caused insureds to be confused or deceived, or that the DOC received any complaints to this effect.”

Nelson said that the government has a duty to not pull out a nuclear option of speech restriction when other options are available.

“Specifically, Safelite points to the fact that the DOC has means—such as outlawing the practice of balance billing, reforming the glass-repair industry through direct regulation, or engaging in its own speech to inform consumers about balance billing—to accomplish its interest in preventing consumer deception,” she wrote, suggesting some of these options as well.

“Most notably, the DOC might require Safelite to inform insureds that balance billing by a non-Network shop depends on the agreement the insured reaches with the shop,” Nelson also wrote.

Safelite lost an argument that it could sue on behalf of AAA — Nelson ruled the “overbreadth” free-speech legal concept didn’t work for commercial speech. However, she agreed that it could sue as a party who’d suffered economic injury because of the Minnesota-AAA consent order.

“Moreover, the practical effect of the Consent Order is that Safelite must cease using any ‘may be balance billed’ language if it wants to act as a claims administrator in Minnesota,” Nelson wrote. “The imminent threat of future prosecution and the self-censorship—or chilling effect—such a threat creates provides standing for as-applied First Amendment challenges.”

That not only helps Safelite, which Nelson observed would be similarly affected in existing and planned consent orders with USAA and American Family, but it helps any other claims administrators trying to promote DRP shops for an insurer.

As noted above, the federal jurisdiction of the case means other states could lose the ability to target “may” statements in regulating insurer and claim administrator steering. However, Nelson did uphold a state law mandating that insurers and call centers remind customers of their right to go wherever they want — and in Minnesota’s case, to make that statement twice.

“There is at least some evidence in the record that the DOC’s interests in informing consumers of their rights and protecting them from being pressured into choosing a particular shop are real,” Nelson wrote. “For instance, in all four call transcripts produced by the DOC, Safelite Operators repeatedly questioned the insured’s choice of a non-Network shop and offered to connect him/her with a Network shop. On two of these calls, the Safelite operator admitted that his/her script required these repeated offers. These might fairly be characterized as attempts to pressure insureds to select Network shops.”

She also disagreed with Safelite that requiring the glass company to remind customers of their right to choose a shop was self-disparaging.

Motivated by shops, not customers? Nelson was skeptical of the state’s methods, pointing out that despite the agency feeling “‘Safelite isn’t cooperating with our subpoena but is nonetheless expanding their presence in [Minnesota][,]’ the DOC elected not to pursue enforcement actions directly against ‘the elephant in the room’ (Safelite), but rather ‘go after [the insurers] using Safelite as a [claims administrator] one by one.'”

The state really got things moving after the commerce department’s Director of Investigations Martin Fleischhacker, who’d in the past heard shop complaints but taken no action, tried to get a windshield replaced himself and “felt like I was being pressured” on a Safelite claims call. (Nelson notes with skepticism that “(s)urprisingly,” Fleischhacker remembered more about the call four months after a vague deposition.)

Nelson criticized the investigation as being fueled by “aggressive lobbying” by competitor glass shops — with which the agency shared information in contradiction to its own policies — and unfounded by actual consumer complaints. She also pointed out that the agency had no idea about the billing habits of shops in the state (of course, Safelite argued that it shouldn’t be required to know that either).

“Here, the DOC produced no empirical evidence (e.g., expert testimony, studies, or even anecdotal evidence) of consumer deception or confusion related to Safelite’s ‘may be balance billed’ statements,” she wrote. “In fact, it received no consumer complaints at all about Safelite’s claims administration services. This lack of evidence—combined with the Minnesota Shops’ aggressive lobbying (which was plainly motivated by their desire to eliminate Safelite as economic competition) and the DOC’s ‘concerns’ about Safelite’s refusal to comply with its subpoena—calls into question the DOC’s purported interest in preventing consumer deception.”

A layman customer doesn’t necessarily know when a repairer is cutting corners on a vehicle as a way to keep insurer costs low — nor the potential conflict of interest of a DRP relationship. However, Nelson said that the state didn’t present any evidence that these issues were happening — an important point:

The Court is similarly skeptical of the DOC’s purported interest in resolving the alleged “inherent conflict of interest” between insurers and insureds related to choosing an auto-glass shop. In Minnesota, insureds have the right to choose which shop repairs or replaces their auto-glass. However, insurers are only required to pay the selected shop a “competitive price that is fair and reasonable within the local industry at large[]” for the work performed. By the DOC’s own account, any disagreement about whether the price a non-Network shop charges is “fair and reasonable” is resolved between the shop and the insurer. If this is true, then there is no “inherent conflict of interest” between insureds and insurers—an insured simply selects whatever shop he/she wishes and the shop and the insurer resolve any ensuing cost dispute. The DOC presents no evidence that this system discourages insureds from selecting their preferred shop, or results in insureds receiving lower quality repair/replacement services.

Nelson barred the agency from enforcing the consent order with AAA and anyone else (As noted above, USAA and American Family were targets too.) with a speech-constraining rule like it. She did not grant Safelite’s request for attorney’s fees at this time, saying they’d have to make a motion to pursue those expenses.