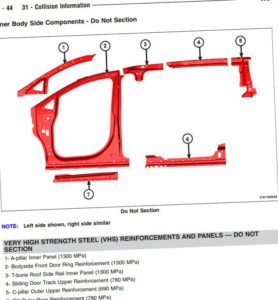 Though there’s likely always going to be local adjusters who refuse to listen, the latest completed “Who Pays for What?” survey found OEM repair procedures to be an effective tool in collision repair-insurer negotiations.

The latest edition of the quarterly survey asks about the success collision repairers have had when asking the Top 8 insurers for reimbursement for various refinishing procedures. It’s open until Jan. 31, and participants will receive a free copy of the results. All responses are confidential; data is published in the aggregate. Take it here.

About 37.5 percent of the 773 shops which responded to the October 2016 survey question reported that OEM documentation was the most effective way to be reimbursed by a carrier for “not-included” operations.

“I would also like to highlight our question asking what is most effective in ensuring you are compensated for ‘not-included’ items,” wrote Collision Advice CEO Mike Anderson, whose company conducted the survey in conjunction with CRASH Network. “Among the choices given, ‘Having OEM documentation’ was ranked as the most effective tool for negotiating with insurers … I think that’s a big message to the OEMs that the position statements they publish really do help our industry.”

Estimating service values generally refer to a “perfect world” situation of a shop performing the work on a new, undamaged vehicle with new, undamaged parts. As such, many legitimate procedures aren’t included in the labor times since the IPs have no way of knowing what’s needed on a particular repair order based on that vehicle’s individual crash damage.

This point can be misunderstood by shops and insurers, and it’s important to check the P-pages to see what’s included and what needs to be added manually. Misunderstandings and disputes still occur, and based on the survey, it sounds like IPs could improve their value for repairers and save both shop and insurer clients time-wasting arguments by facilitating such additions.

“Friction and tension is waste,” Gerry Poirer of Farmers observed on a 2016 NACE scanning panel. (Thanks to Collision Hub’s video coverage for helping us with quotes.) “And it’s cost.”

Other types of documentation also facilitated the negotiations. Shops reported having reimbursement success when armed with dealership and aftermarket invoices.

McDonnell Group President Matthew McDonnell (perhaps best known for Big Sky Collision), said earlier this month that his accounts receivable posts a 90 percent success rate because he documents everything he requests from carriers.

McDonnell said he learned the importance of documentation from Anderson, and his three-shop Montana MSO places a tremendous importance on it.

At a Collision Industry Conference on scanning shortly afterward, McDonnell described his shops’s mantra as “‘If it’s not documented, it didn’t happen.'”

He said USAA has praised him for being the most accurate shop in the area, and Chubb asked him to be a DRP shop on the basis of his estimates.

“200-line estimates happen all the time,” McDonnell said, but “I just write what’s fair.” Everything is backed up with justification — p-pages, OEM instructions, etc. — and he said that sometimes the shop will spend four hours on documentation.

With that paper trail, “they pay it,” he said.

“I don’t think adjustors are dumb. … I don’t think my people are dumb,” McDonnell said. He said some insurers might not be spending enough on training adjusters, however.

That would seem to make it imperative for a shop to provide that education rather than go in guns blazing with an adjuster disputing a bill. (Should that not work, the shop or customer at least has all the documentation to make a pretty good argument in small-claims court.)

“The hardest guy to argue with is the guy that doesn’t know,” McDonnell said.

Repair procedures for the 2017 Chrysler Pacifica are shown. (Provided by FCA)

The October 2016 “Who Pays for What?” survey found OEM repair procedures to be an effective tool in collision repair-insurer negotiations.  (Provided by Collision Advice and CRASH Network)